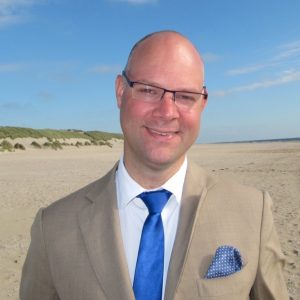 Alexander van den Bosch has been appointed as the new Director of the European Federation of Inland Ports (EFIP). He succeeds Kathrin Obst, who took on a position at the European Commission, DG MOVE in April.

Alexander van den Bosch (picture) has been working for more than thirteen years in EU policy-making and advocacy in Brussels. Over the last six years, Mr van den Bosch has worked as EU representative for the Province of Zuid-Holland (NL), a strong transport region. In that capacity, he has also been involved in the setting-up of the European network CLINSH (Clean Inland Shipping).

Before that, he was representing the Urban Network Brabantstad in Brussels, after having served for three years as policy advisor in the European Parliament. He studied at the Dutch Institute for Public administration (Thorbecke Academy), at the Erasmus University in Rotterdam and at the College of Europe in Bruges. Alexander is Dutch, is fluent in English and French, and speaks good German and some Polish.

“We are very much welcoming Alexander van den Bosch as our new Director”,  says EFIP President Hans-Peter Hadorn,  “Alexander has a solid basis in EU policy making and advocacy. Moreover, since he has been representing over the last years a region in which ports, both sea- and inland ports, and inland waterways play an important role, I am sure he has seen what inland ports can bring to a region. This is why I believe he is very well-placed to show the added value of inland ports as multi modal nodes, linking the sea ports with the hinterland and vice versa”.

“It is a great honour for me to be on board of EFIP and to make the voice of inland ports heard in Brussels. Every inland port in Europe is gifted and, as multimodal nodes of transport in the hinterland, they take a crucial position in solving today’s and tomorrow’seconomic and environmental challenges of Europe’s transport sector. My experiences in the Region will be very useful and I am really looking forward to learning, working and acting together not only with the different inland ports all over Europe and ESPO, but also with the involved actors and EU institutions in Brussels.” says Alexander van den Bosch.

Alexander van den Bosch will be working at the EFIP Secretariat, which is based in Brussels and has a joint office with the European Sea Ports Organisation (ESPO). He will take up his new position on 1 September.

EFIP actively follows all developments in the field of EU policy of importance to inland ports and represents the inland ports vis-à-vis the European institutions and other international bodies. EFIP offers its members the possibility to exchange information, expertise and best practices with colleagues in other countries