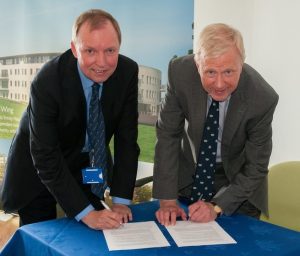 On Day of the Seafarer, 25 June, residents from across Mariners’ Park, a retirement community for ex-seafarers in Wallasey, turned out to witness a formal signing ceremony for a new £1.17 million funding deal between the leading maritime charity, Seafarers UK, and the charity that runs the Mariners’ Park estate, Nautilus Welfare Fund.

The ‘Memorandum of Understanding’ was signed by the Chairman of Seafarers UK, Vice Admiral Peter Wilkinson CB CVO, and Mike Jess, Secretary of the Nautilus Welfare Fund. The agreement will see Seafarers UK providing £1.17 million in funding towards the building of a major new extension to the recently completed Trinity House Hub retirement complex on Mariners’ Park.

The new Seafarers UK Centenary Wing will provide a further 22 single and double occupancy apartments for retired and elderly Merchant Navy and Royal Navy seafarers, and their dependants, and is due to open by the late Spring of 2017 – during Seafarers UK’s Centenary year. The additional apartments will meet a real need for high quality housing and, with a 24-hour care staff team on site, will be able to support ‘a balanced community’ of those with low, medium and high needs.

Speaking at the event Peter Wilkinson said: ‘Seafarers UK was formed in 1917 to help people in the maritime community by providing vital funding to support seafarers in need and their families. 98 years later that is what we are still doing – by giving money to charities and projects that are making a real difference to people’s lives across the Merchant Navy, Royal Navy and Fishing Fleets. And in recognition of our support for older and veteran seafarers, and because of our strong relationship with Nautilus Welfare and Mariners’ Park, we have now made a major commitment to invest just over half the finance required over the next two years to build the Seafarers UK Centenary Wing.’

Continued Peter Wilkinson: ‘This capital project grant will provide the Nautilus Welfare Fund with the majority of the funding it needs for the design and building work. The remainder of the funds will be raised by the Nautilus Welfare Fund, and we hope through local fundraising as well. Today marks the beginning of that process by hopefully helping to raise awareness of the project locally.’

Mike Jess of the Nautilus Welfare Fund also highlighted that: ‘These extra 22 state of the art apartments will boost the overall accommodation on offer at Mariners’ Park by almost 20% and will make a major contribution to meeting the needs of an increasingly elderly population of merchant mariners.’