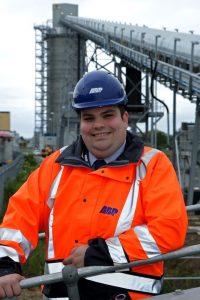 Craig, who’s originally from Liverpool, comes to the post from a position as Assistant Operations Manager for the Conventional and Dry Bulks department at the Port of Tyne, where he was responsible for a number of cargoes including steel, coal, scrap metal, forestry products and heavy lifts.

During his time at the Port of Tyne Craig was also responsible for the facility’s wood pellet operations including discharge, storage and redelivery. The role included the management of a purpose-built 70, 000 tonne wood pellet shed and all of the operational activity and maintenance that involved.

ABP Port Manager Hull &Goole Mark Frith said: “Craig comes to ABP with lots of relevant experience in port operations and dry bulks in particular, and I’m looking forward to working with him to develop our own operational activities, particularly around ABP’s biomass business.

“I know his expertise will enable us to improve our operations for the benefit of our business and our customers.”

Craig began his career as an apprentice at the Port of Liverpool, where he completed an NVQ and a degree in Port Operations Management. He spent seven years with both Mersey Docks and Peel Ports, where he was a supervisor looking after all aspects of steel handling, storage and redelivery, before moving across to supervising the animal feed operations including storage, redelivery and discharge of various feed products to a purpose-built animal feed store.

Craig said: “I’ve been working in the ports industry for more than 10 years after an opportunity came up at the Port of Liverpool. I had just finished my A’ Levels and embarked on an apprenticeship with Mersey Docks where I progressed to supervisor before moving over to the east of the country to join Port of Tyne.

“I love the ports industry – I love the diversity of the work, dealing with different types of people and their vast array of skills. I also enjoy dealing with operational issues and finding solutions that benefit the port and the customer. I’m fascinated by the constantly evolving ways of working and operating, ensuring the company is as efficient as possible without compromising on health and safety.”

Craig was attracted to the role at ABP as he saw it as a chance to become part of the UK’s biggest ports group and take on a role that would be central to attracting new business to the Humber as well as give him real career development opportunities.

“I have a range of skills which will be of use to ABP, ” said Craig. “My time at different ports will complement this and will make operations within ABP Humber more streamlined and productive.

“I have a real focus on health and safety and employee engagement and will develop the department as a team. I’m also hoping to benchmark ABP Humber’s dry bulks business against other ports to see what we do well and where we can improve.”