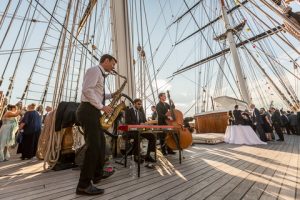 The glamorous event took place on the newly refurbished tea clipper, just one of only three remaining original composite clipper ships from the 19th century. Guests enjoyed drinks on the upper deck in the brilliant sunshine before dining under the hull of the ship, a first for the shipping industry.

Master of ceremonies for the evening was former England cricketer Jack Richards who got the night off to a lively start with a maritime-themed quiz.

The stars of the evening were two most engaging speakers; Horatio Clare and Debra Searle, who enthralled 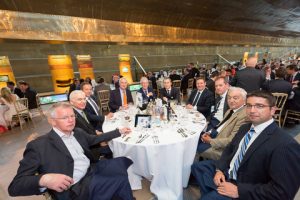 guests with tales of their adventures – a first voyage on a merchant ship and a solo row across the Atlantic. Both speakers have written enthralling books which tell further of their exploits.

Debra said, “It was such an honour to speak at Sailors’ Society’s dinner and to share some of my ocean adventures with a crowd who really understand what it means to live at sea for months. Dining under the hull of the Cutty Sark could not have been more perfect. It really was an incredibly special evening.”

Education is one of Sailors’ Society’s key objectives and money raised as a result of this event will go towards paving the way for students to start a maritime industry career via the Society’s various scholarship programmes.

Sailors’ Society’s director of fundraising, Jan Webber, said, “Thanks to Debra, Horatio, Jack and all of our supporters for making this event such a success. The money raised at this event will go a long way in funding the futures of the next generation of maritime professionals.”