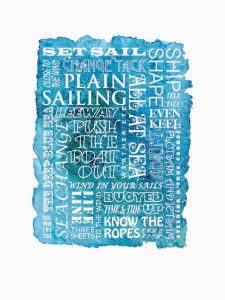 London artist Sue Tritton Brown is captivated by the friendliness of the Greek people and intrigued by the beauty of the islands, especially Skiathos.

Here she recounts her first inspiring encounter with the Aegean.

“I had no idea what to expect as we made our way along the pontoon in Skiathos, past boat after boat with Greek flags fluttering, but from the first moments – balancing along the gangplank, and my brother-in-law’s greeting of ‘welcome aboard’ I was completely hooked.

“What amazed me most about the Aegean was the colour of the sea. It took me by surprise each time I climbed up the companionway and out into the sunlight, finding myself surrounded by dazzling, sparkling deep green and turquoise; a total immersion in colour.

“My sketchbook always accompanied me; I tried to capture the passing scenery of islands and coves, the colour of the sea, the wash from the boat, changing vantage point each time we changed tack.

“I became fascinated by sea charts, learnt about magnetic variations, imagined lines of latitude and longitude superimposed over the sea and stretching away to the horizon. I was struck by the contrast between the formality and order of the grids on sea charts and the ever-changing and fluid expanse of sea.

“As a graphic designer I was used to working accurately within a page grid. I now began to combine elements of accuracy and detail with much freer paint processes to explore this contrast as well as the wider conventions of hydrography. I began to see the process of mapping and recording as a metaphor for our attempt to impose order upon our world – to make our passage navigable. With this in mind, I also started to make personalised art that celebrates the passages and waypoints of life.

“I recently started dinghy sailing in England. Being on the water and ‘messing about in boats’ feeds my passion for sailing and provides inspiration and information for my art; the people are friendly and very helpful; the lake is beautiful; but I still look forward to my next visit to Greece.

“The generosity of attitude, hospitality and friendliness of the people as well as the beauty of Greece keep me going back there again and again. I would like to say that it was also the historical culture, but apart from the excellent and quirky museum on the island of Alonissos, with its collection of artefacts from pirate ships, from both World Wars and traditional trades as well as an art gallery, further such delights remain to be sampled.” 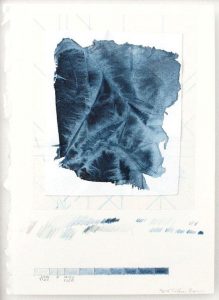 Sue had visited the Ionian group a couple of times previously (Ionians colonised Skiathos in the 8th century) but it was Skiathos (where the first flag of Greece was reputedly hoisted in 1807 and from where ships fought in the 1821 Greek War of Independence) that fully captured her imagination. Her personal perspective can be viewed as a small contribution towards counterbalancing the current emphasis on the nation’s financial and political woes.

In her continuing work at her studio in the Hawks Road complex at Kingston upon Thames, Sue is exploring the conventions of map making and measuring, which as she explains here she sees through a nautical prism. Another side to her practice is an appealing Pop Art talent in which she chronicles celebrations of special occasions, often as commissions. 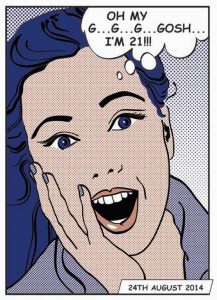 Sue studied graphic design at Canterbury College of Art, and moved to London to pursue a career in publishing as a designer and art editor. She worked on publications including Harpers and Queen,  Personal Computer World and With the Beatles: the historic photographs of Dezo Hoffmann, for which she was a picture researcher. Later she taught art and craft workshops for the children of asylum seekers and refugees, and studied fine art at the London City Lit.