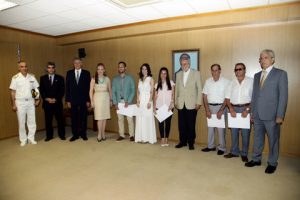 Earlier on this afternoon at the premises of the UGS (Union of Greek Shipowners) down town Akti Miaouli, the double annual event took place for rewarding those seafarers who ended their careers in 2011 with the longest sea—service and the prize-awards of scholarships for post graduate studies to respective university students.

Present at this event were the Alternate Minister for the Economy, Infrastructure, Shipping and Tourism Thodoris Dritsas, with the respective Secretary-Generals Ioannis Theotokas and Athanassios Christopoulos, the Commandant of the Harbours Corps-HCG Radm. Athanassios Athanassopoulos together with the Deputy Radm. Athanassios Hondronassios as well as the heads and members of Maritime Unions and Shipowning Organisations.

In his welcome short and stimulating speech, the President of UGS Theodore E. Veniamis said: “This event which has become a ‘decree’ custom for UGS and its members comes at a crucial time for the future of our country. We all hope and whole-hearty wish for a fruitful end in this saga that our nation and its citizens experience these days”.

The prize-awards of Euro 3, 000 each for the seafarers which were given by Theodore Veniamis in the respective categories of Officers and lower crew ratings, were received by 3rd Engineer Stavros Akoumianakis and Chief Cook Dimitrios Barbounis.

Mr. Akoumianakis was born in Rethymnon, Crete, in 1949 and ended his career after 29 years, 3 months and 4 days of service, all on ocean going vessels above 4, 500 dwt, with the majority on board HALCOUSSIS Z & G Co. Ltd.

Mr. Barbounis also born in 1949 comes from Syros, one of the Cyclades Island and ended his career in 2011 after 32 years 1 month and 20 days out of which 31 years, 7 months and 23 days on board ocean going vessels above 4, 500 dwt; more or less all his career was on board vessels of United Shipping and Trading.

The Scholarships for post graduate studies relevant to shipping were given as follows:

The US$ 10, 000 UGS Scholarship in memory of the late UGS President Antony J. Chandris was awarded to Ariola Ligatai. Ms Ligatai was born in Albania but has been naturalized Greek. In December 2011 received her diploma for the Law Faculty of the University of Athens with an 8, 24 point marks. She has already enrolled in the post graduate course of the Aix Marseilles University to study the Law of Sea Transport.

The Irene S. Daifas Scholarship in memory of her late father Stavros was given to Ms Eleni Bouyoukou. In July 2014 Ms Bouyoukou received her diploma from the University of Patras, Peloponnese, Faculty of Company Organization and Management and in September 2014 she began her post graduate studies in the University of Newcastle at the department of Maritime Transport and Management.

Finally, the Lloyd’s Register Foundation’s Scholarship of 10, 000 pounds sterling was awarded to Grigoris-Konstantinos Serefias. Mr. Serefias graduated from the University of Aegean, Faculty of Shipping and Entrepreneurship receiving top marks! He has received many awards and prizes for his top level studies performance. This coming September he will start his post graduate studies in Maritime Operations and Management at the John Moors University in Liverpool.

As an epilogue to today’s event, Theodore Veniamis said: “I wish whole-heartily to our very dear seafarers who received today’s awards good health and personal happiness with their families. I also hope that you will keep in your memory the positive experiences and memories from your long service in the seafaring profession and that you will “transfer” same to the new generation of seafarers.

I also wish to the new scientists all the best of luck in their chosen studies and you must be optimistic that their specialised education chosen and your zeal so far to obtain same will greatly assist you in the difficult field of your future business career in achieving the targets set!