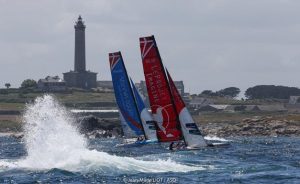 François Morvan, Thierry Douillard and Frédéric Moreau score their first victory in today’s 35 mile long coastal race in Roscoff, after 3 hours and 30 minutes of racing. They led the fleet for most of the course, racing neck and neck with Groupama in the last few miles. Grandeur Nature takes third place.

« We’ve been waiting for this victory ! » said helmsman François Morvan. « We are only one third of the event, so we still have the time to try and reach the podium and threaten Groupama ! We were relieved to see the finish line as Groupama was right behind us. We had less speed upwind, but we managed to hold on to our position thanks to our stategy and team work. I was my first day at the helm of Spindrift so I didn’t have the time to take my marks. Thierry Douillard, our tactician, never stopped keeping an eye on the rocks ».

The coastal course was set along the coast of North Brittany, famous for its countless rocks and tricky navigation. But as opposed to Act 2 coastal race in Fécamp, none of the Diam 24 damaged their daggerboard by going too close from the shore. A westerly breeze was blowing 10-15 knots today in the area offering nice sailing conditions. In the first third of the course, around Batz island, three boats took the lead and broke away from the rest of the fleet : Spindrift, Groupama and Grandeur Nature, whose skipper Frédéric Duthil is very happy with their performance : « we were in the top three boats but after going out of the channel of Batz island, we had a little problem with one of our rudders and we lost touch with Groupama and Spindrift, but we fixed it and finished the race no problem. It’s a great result. A 3rd place on a Coastal race is worth a lot. We have a good speed, and a good team work with Pierre-Yves and Tim ».

Overall, Groupama keeps its leadership. And behind, the competition is getting tighter. CombiWest is still second but has lost its point adventage over Grandeur Nature. « We don’t want to put pressure on ourselves regarding the overall ranking. What we want is to keep progressing and to keep building up from what we started three weeks ago, because we only got the boat three weeks ago. We are just going step by step and give our best every time. We hope we can reach Groupama et Spindrift’s level by the end of the Tour ». said Fred Duthil.

Tomorrow the fleet will sail a serie of Stadium Races, with a first start at 11.30.