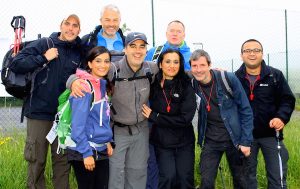 JULY 8, 2015 – An 11 strong team from ShipServ, the world’s leading maritime e-marketplace, has raised £4, 313 for charity Heart Research UK by scaling three mountains in the Yorkshire Dales National Park in only 13 hours. CEO Paul Ostergaard and ten colleagues climbed a total of 1, 558m and walked more than 23 miles over Pen-y-ghent, Whernside and Ingleborough.

The money raised in taking on this challenge will go towards Heart Research UK, a British charity which primarily spends its funds on medical research into the prevention, treatment and cure of heart disease. Two such conditions Cardio Vascular Disease (CVD) and Hypertension have been cited by Nautilus International as particular health hazards for seafarers aboard merchant marine vessels often brought on by long working hours and difficult conditions. ShipServ hopes that steps forward in research boosted by their fundraising will benefit individuals across the seafaring community, and the world, as well as their home in the UK.

ShipServ, Founder and CEO, Paul Ostergaard commented: “Despite the weather being typically English, misty, cloudy and rainy, on the day the 11 of us worked together as a great team and were really spurred on by the cause. The last peak of the day, Ingleborough, was the steepest and we had already been walking for nine or ten hours, it was really tough after a long day but we pushed through and although it tested all of our abilities, our stamina and our determination, it was a really rewarding day. ”

In July 2014 a team of three ShipServ employees completed the 24 Peak Challenge in the Lake District National Park to raise money for Seafarers UK. The company intends that these charity challenges continue on an annual basis with the challenge and charity for 2016 yet to be decided.

About ShipServ
ShipServ is an e-marketplace that connects buyers in the maritime and offshore industries (shipowners, managers, yards and oil rigs) with suppliers of spares, stores and anything else that is used on a ship. In 2014, ShipServ facilitated US$2.5bn of annual trade from over 200 buying companies, managing over 9, 000 vessels and trading with over 55, 000 suppliers in over 100 countries around the world.

For suppliers, ShipServ offers an effective way to build their brands and sell and market in the marine and offshore industries.

Tidewater joins NAMEPA in support of efforts to...