Top Posts
COVID-19, plague, planets, conjunctions, comets, and the Chinese...
Don’t take chances where your health is concerned…
Vital statistics of results of the allaboutshipping 100...
The www.allaboutshipping.co.uk Top Women in Shipping for 2020
Dr. Marina Papaioannou
March, IWD2021 and other Events – WISTA UK
Where will I dock each night on my...
Stena Line aims to become the most diverse...
Raskin says US ready to lead in climate...
American Club Member Alert (March 5, 2021) re-...
GreenVoyage2050: States accelerate action to decarbonize shipping
On-Demand Recap: Leaning into the Future and the...
Life raft for missing fishing vessel Nicola Faith...
New global ISO-standard for ship-shore data exchange
Home Ports & TerminalsSailing Lypayskiy and Breault victorious in Vladivostok
SailingSportsYachting

Lypayskiy and Breault victorious in Vladivostok 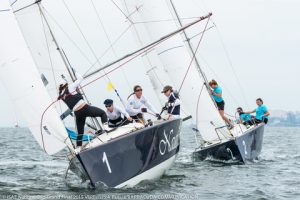 Sunday 19 July 2015 – Issued on behalf of ISAF – The ISAF Nations Cup Grand Final rounded up with a win for home town sailor Vladimir Lypavskiy in the Open division and USA’s Nicole Breault in the Womens division.

Breault had been looking strong coming out of the final round-robin with a perfect four from four record. The American continued her fast racing in the semi finals to take a 3-1 win over 2013 winner, Brazil’s Juliana Senfft, to progress.

Her opponent in the final was France’s Pauline Courtois who came through a tough semi final against Singapore’s Jovina Choo, who had been looking strong in the round-robins.

Breault proved too strong for her French opponent in the final winning the match up 3-1 to be crowned Womens division champion. She said, “Well, the French team was very good in the pre-start. We started behind them and then we caught them.

“When it happens the races are very aggressive, we were making sure that we didn’t get tired. We enjoyed the racing a lot and we worked very hard to win.”

To complete the division, Choo beat Senfft 2-0 to take third place in her final match.

In the Open division, Australia’s Evan Walker and Russia’s Vladimir Lypayskiy have been looking the stand out performers with near perfect records throughout the regatta. The only defeats had been inflicted on one another, so it was no surprise to see the two battle it out in the final.

With both taking great records into the final, something had to give between the two. After two matches it was almost predictably all square at 1-1. Spurred on by moving ahead in the third match, Lypayskiy took his confidence into the fourth and finally got the break that proved the difference. Lypayskiy had taken the final 3-1 to be crowned Open division champion.

Lypavskiy said, “This win means so much to me as the rank of the event is very high and I’m very proud that it takes place in Vladivostok, Russia, in my home town. We were a bit under pressure as we felt that we are expected to win. We were so happy to win.”

The Russian’s semi final opponent Rhimbault took the third place match up with a 2-1 win over Silvestri to round up the competition.

As well as taking the titles of Nations Cup Champions, Breault and Lypayskiy get an invitation to defend their titles in the 2017 Grand Final.