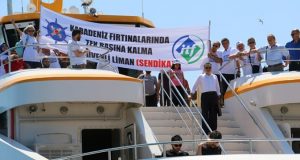 Concerted action by the ITF and maritime unions on two continents in one week was successful in bringing support to seafarers working and living in sub-standard conditions, and in spreading the word about the role of trade unions in protecting seafarers and their rights under international maritime law.

Once again, the Japanese unions held a rally outside the head office of the shipping company Kotoku Kaiun Co Ltd to protest against its hostility to trade unions and refusal to let the ITF and union members board its ships. Japan ITF coordinator Fusao Ohori reports that this was the 97th such campaign week since 1984, with the next scheduled in September.

In South Korea, ITF inspectors visited 11 vessels, settling an overtime claim on one, pursuing delayed payment in wages on a Russian-owned, Cambodia-flagged vessel, and supporting repatriation for seafarers whose contracts had ended.

ITF’s Vladivostok-based inspector Petr Osichansky reports that 18 vessels were visited in Russia’s Far East, with only three found to be covered by an ITF-approved agreement for crew members. The pay for some crew had fallen with the decline of the rouble against the US dollar. Positively, the Maritime Labour Convention 2006 (MLC) had been used to help crew get back pay owed to them.

The final results of the parallel week of action in six countries around the Black Sea, plus Israel, were that union action teams visited 205 vessels in 29 ports with more than 3, 110 crew members on board. Inspection teams issued warning notices when ships were found to be not applying approved agreements for crew, and informed hundreds of seafarers about the work of the ITF, maritime unions, and their working rights.

In Romania, for example, 32 out of 45 vessels inspected in three ports were found not to be applying the MLC to crew members. In Turkey, the inspection of a Palau-flagged vessel in Hereke led to its arrest for non-payment of crew, who were owed more than USD200, 000 in unpaid wages. In Tuzla, the crew of a Belize-flagged vessel were found not to have been paid for more than three months – the inspection teams came to their assistance, including aid with repatriation of the mainly Russian crew.

Pursuing the ITF’s campaign against the antiquated vessels used to ply what it calls the “sea of shame”, the average age of inspected vessels was recorded as more than 22 years – with ships as old as 30 years plus found in some Black Sea ports.

Commenting from Romania, ITF inspector Adrian Mihalcioiu said that the week had been a success not only in drawing the attention of shipowners and authorities to the ITF campaign, but also generating huge media and public interest in the conditions for seafarers working on sub-standard vessels.