Top Posts
COVID-19, plague, planets, conjunctions, comets, and the Chinese...
Don’t take chances where your health is concerned…
Vital statistics of results of the allaboutshipping 100...
The www.allaboutshipping.co.uk Top Women in Shipping for 2020
Dr. Marina Papaioannou
March, IWD2021 and other Events – WISTA UK
Where will I dock each night on my...
Stena Line aims to become the most diverse...
Raskin says US ready to lead in climate...
American Club Member Alert (March 5, 2021) re-...
GreenVoyage2050: States accelerate action to decarbonize shipping
On-Demand Recap: Leaning into the Future and the...
Life raft for missing fishing vessel Nicola Faith...
New global ISO-standard for ship-shore data exchange
Home HRAcademia ABP gives Grimsby school children a taste of life on the port
AcademiaCharityCommunicationCorporate Social ResponsibilityHRManning - Seafarers and OffshoreMaritime Education and TrainingPorts & Terminals 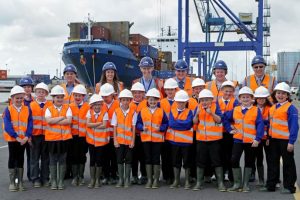 Associated British Ports (ABP) recently hosted a port visit to a group of 17 Year 5 pupils from Strand Primary Academy in Grimsby who are learning about where their food comes from and how it starts on the farm and ends up on our fork.

ABP agreed to take the children on a journey of discovery by giving them a VIP tour of the ports of Grimsby and Immingham.

Matthew Franklin, Assistant Principal of Strand Primary Academy, said: “It’s fantastic to get the children out into a working environment to raise their aspirations. The children are able to see how many job opportunities there are in our local area and it’s great to see them so excited about our heritage.”

The children stopped off at the Grimsby Fish Market where they received a guided tour from CEO Martyn Boyers who gave the children a brief history of Grimsby’s fishing heritage.

The children were given the opportunity to look inside the auction house where the fish are weighed and sold. The group was encouraged to get hands on and find out about the anatomy of fish we regularly consume such as cod, haddock and skate.

After watching a haddock being filleted and getting hands-on with a lobster, the group made their way to ABP’s Port Office where they had a brief lesson on the cargoes ABP handles with an emphasis on food production.

Year 5 pupil Zara, 10 said: “When we set off this morning, I thought Grimsby dock was a bit boring but now that I’ve been, I thought it was so much fun!”

In the afternoon, the children toured the Port of Immingham where they visited Immingham Container Terminal, learning about which products are brought into the dock in containers and then went on to the Immingham Bulk Park, to learn about fertiliser, cane sugar and animal feed.

Richard Claridge, ABP’s Purchasing Assistant, Humber and Strand Primary Academy Governor organised the visit. He said: “Today has been fantastic, the children have had such an educational yet fun filled day.

“The trip really seems to have sparked the imagination of the whole group and many of the children said that they wanted to work on the docks when they grew up. These experiences are priceless for the children and extremely rewarding for us here at ABP.”

£130-plus million is currently being invested in the biomass handling terminal in Immingham, in a Humber-wide agreement with Drax Power Ltd that has seen £25 million invested in a biomass handling facility in Hull. The Immingham Renewable Fuels Terminal handles sustainable biomass shipments and will create over 100 permanent jobs once complete. The construction phase  created 100 employment opportunities.

Goole is situated 50 miles upriver and is the UK’s premier inland port. It handles over one million tonnes of cargo annually

Last break before the Tour’s outcome

Improving operations on deck systems in the United States Navy.