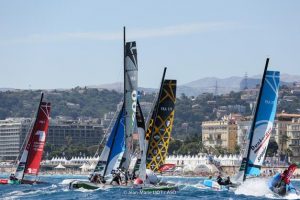 Fast racing, thousands of visitors and a suspense up to the very last day.

The 2015 Tour de France à la Voile is coming to an end and after the victory of Team Spindrift yesterday, the fleet sailed a series of exhibition races followed by a boat parade in the Bay of Angels. The 28 teams have been part of a fantastic 38th edition that saw the launch of a new race boat, the Diam 24 trimaran, and a new Stadium Racing format to bring the action closer from the spectators.

« We all wanted to bring sailing close from the shore and the public », said Spindrift skipper Xavier Revil. « It’s a wonderful sport. I hope the spectators who were watching us from the shore have enjoyed it. Sailing is becoming a show and I think this is great. It’s beautiful, there’s action, suspense, tension, crashes, and that’s just life. I think we managed to pass on the message to the public and I think this Tour is a huge success ».

The Race Village welcome thousands of visitors in each venue all around the country over 9 Acts. Dunkirk, Fécamp, Pornichet, Roscoff, Les Sables d’Olonne, Roses, Gruissan, Marseille and Nice. Each stage of the 2015 Tour de France à la Voile has offered the sailors a perfect mix of sailing conditions and a lot of action on the race course, with dramatic capsizes and crashes. « I don’t want to think of the final result, but of our five victories and all the races we won », said Groupama’s helmsman Pierre Pennec. « We’ve had some amazing sailing moments, like when we finished first six minutes ahead of the second boat in Pornichet coastal race. We had a great boat speed. It was fantastic. Then on the Stadium racing in Gruissan where we struggled in the first race and then came back to win the next three races. To me it was one of the best moments of this Tour. And I will also remember the astonishing coastline in Fécamp, Roscoff and Marseille. It’s just so beautiful. I would like to thank our team who has been amazing in shore and on the water ».

The new Diam 24 also had a huge success amongst the teams. Light, fast, easy and quick to dismantle and put back together, reasonnably low-cost compared to other boats, the one-design trimaran is a perfect platform for a itinerant sailing event like the Tour de France à la Voile. « I love the Tour’s new version. We are closer from the shore and it’s fast. Sailing a coastal race doing an average 10-15 knots boat speed is amazing. It’s a real pleasure », said CombiWest skipper Frédéric Guilmin. « Hats off to A.S.O who managed this event remarkably well, when no one knew how it would go with the logistics onland », said Spindrift skipper Xavier Revil. «We were a bit concerned about that but it went really well, with good spirit, and that’s a real bonus ».

Following this memorable edition, many teams have already expressed their interest for next year’s Tour de France. « We’ll be back next year for sure ! », said Vannes Agglo – Golfe du morbihan co-skipper Matthieu Salomon, whose team was the youngest one of this year’s line-up and won the corinthian rankings. « Vannes Agglo is a three year campaign and we want to come back and win the overall rankings. It might be a bit ambitious but we are going to prepare and train hard for that ».

And the winner of the Tour de France à la Voile is : Spindrift

Fred. Olsen Cruise Lines’ fleet comes together for the first time ever – in Bergen – on 28th July 2015