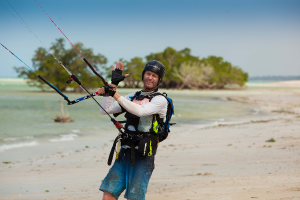 Jacob is a General Manager at Hong Kong-based ship owner Pacific Basin and the founder of Mission: Safe Ocean, a campaign to raise awareness of the roots causes of piracy and to support long-term efforts to improve the safety of the Indian Ocean. His goal is to kitesurf over 1, 000 km solo along the coast of East Africa. With just a surfboard and a kite, Jacob will be relying on the power of the wind and waves to make his way along the coastline of Mozambique, Tanzania and Kenya.

Jacob’s challenge began in Pemba, Mozambique and is expected to take up to four weeks to complete. Speaking shortly before he took to the water in Pemba to start his expedition, Jacob explained his motivation for establishing Mission: Safe Ocean:

“Through my work in the shipping industry, I see the threats to the safety of the ocean along the East African coast and the costs that are borne by all seafarers, local and international. We need to find long-term solutions that address the roots causes of piracy and help to make the oceans safer for all seafarers. My goal with Mission: Safe Ocean and this expedition is to shine a light on these root causes and to raise money for two charities that are doing fantastic work at the grassroots to support coastal communities in Somalia and the 1.5 million seafarers around the world.”

“I know how tough this expedition will be, but I believe that we can make a positive difference to the lives of those who bear the brunt of the risks and costs of piracy. I hope that the international shipping community and everyone who cares about our oceans and our seafarers will get behind our mission and help us to raise funds for the vital work of the Mission to Seafarers and Adeso.”

“Jacob is taking on a courageous mission in aid of two very worthy causes. We share Jacob’s commitment to helping to make the oceans safer for all seafarers and to raise awareness of the root causes of piracy. It’s going to be an incredibly tough challenge for Jacob, but everyone at Sturrock Grindrod Maritime offers our very best wishes to him for strong prevailing winds and full speed.”