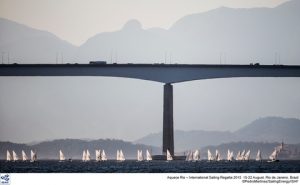 The Laser and Laser Radial fleets, racing on the Ponte course, and the Men’s and Women’s RS:X, sailing on Escola Naval, had to contend with a 6-10 knot southerly breeze. Bathed in Rio’s winter sun the competitors were put to the test with those who had done their homework on the light conditions coming to the forefront. 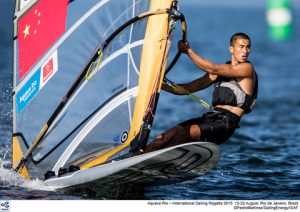 China’s Aichen Wang was fast out of the blocks posting a fifth and double bullets in the Men’s RS:X. The Chinese sailor has an early advantage over Pawel Tarnowski (POL) but with nine more fleet races and the Medal Races remaining, Wang won’t be getting carried away with his good start.

Pierre Le Coq (FRA) finished second at the 2014 test event and started well once again at the 2015 edition. An opening race win backed up by a sixth and a fifth leaves him third overall.

After racing Le Coq said,  “I was a bit frustrated in the last race as I was first on the upwind but it was tricky out there with a lot of current. The Chinese sailor managed the current best today and he now leads the fleet. 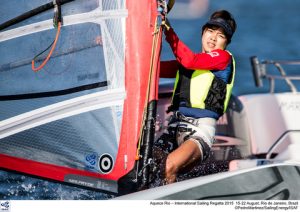 “I expected to see the Chinese sailor at the front as I have been training with him for the past few weeks and he is on form. I am not surprised.

“I am still in the game and it is not a bad beginning.”

Wang tops the leaderboard on two points followed by Tarnowski on five and Le Coq on six.

The performance of the day in the Women’s RS:X came from Poland’s Malgorzata Bialecka. Whilst she does sit third overall she was the most consistent performer, recording a third and a second and a fourth, which she discards.

Lilian De Geus (NED) also had an impressive day, notching up a 2-(6)-3 and sits in second.

Hei Man Chan (HKG) tops the billing in the Women’s RS:X on four points. However, Chan started her event off with a tenth which she discards. Whilst it’s not a bad score for Chan, she will want to ensure her performances over the coming days replicate the third and first that she ended her day on. 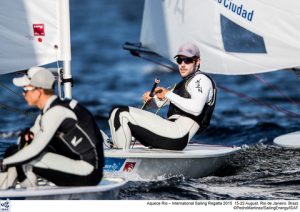 London 2012 Olympic silver medallist Pavlos Kontides (CYP) and five time Olympic medallist Robert Scheidt (BRA) hold the early advantage in the Laser after a consistent day on the water. The pair are locked on nine points apiece with Kontides sailing his way to a 2-7 and Scheidt, a 6-3.

Tonci Stipanovic (CRO) started the day off with a standout performance that saw him beat Kontides by 17 seconds as he explained,  “It was really light conditions. In the first race I had a plan to stay on the right [side of the course] and I was heading first to the right but the guys in the middle had some more pressure so I was sixth by the up mark. Immediately in the downwind I passed two boats, then on the upwind I stuck with my plan to stay right and there was more pressure and I finished first.”

Stipanovic was unable to capitalise on his outstanding start and could only manage a 14th which leaves him fourth overall at the early stage of the competition.

The day’s other race victory went the way of Nick Thompson (GBR) who is fifth overall. 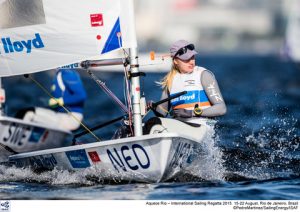 Marit Bouwmeester (NED) was impressive in the Laser Radial and leads the way on eight points. She opened her day up with a second and followed it up with a sixth.

Veronika Fenclova of the Czech Republic is two points off the Dutch sailor after an 8-2 with Gintare Scheidt (LTU) third on 13 points.

Race victories were picked up by Manami Doi (JPN) who is ninth overall and the fourth placed Paige Railey (USA).

The remaining racing areas on the opening day were filled with the sailors from the other six Olympic events who were fine tuning their preparations for the start of their competition. Racing continues onSunday 16 August at 13:00 with all ten of the Olympic events taking to the water.