A Day of Contrasts 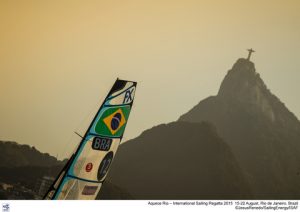 It was a day of contrasts at the Aquece Rio – International Sailing Regatta 2015 with the inside course areas playing host to all of the day’s competition.

A steady 10-12 knot southerly breeze inside Guanabara Bay under a beating Brazilian sun enabled some interesting racing for the competitors. Meanwhile, outside of Guanabara Bay, it was a different story as the wind failed to materialise for the sailors to compete.

With the fleets sailing inside completing their scheduled races, the decision to move those from outside the Bay to inside was made, enabling a single early evening race for each fleet.

In total, the Pão de Açúcar, Escola Naval and Ponte courses played host to eight fleets who completed 15 races between them.

Germany’s Paul Kohlhoff and Carolina Werner continue to impress in the Nacra 17. It was a near perfect day for them as they took a second and two firsts to grab hold of the lead.

The Germans have eased their way into the Nacra 17 and are firmly on their way to hitting a peak in time for the Olympic Games. “We’re not doing anything special, ” answered Kohlhoff when asked about his secret to success,  “We’ve been solid. We started well all day and we’ve been pretty quick. We’re not much quicker than anyone else; we’re just on the quickest side of the fleet and managed to get a few good shifts and big puffs.”

Kohlhoff and Werner won their first gold at Kieler-Woche earlier this year but at the Olympic Test Event, the quality of the fleet is extremely high and is almost a replica of the Olympic Games. At the midway point of the event Kohlhoff didn’t expect to lead but he and Werner won’t be getting too carried away as anything can change in a given moment.

“We’re keeping focused and doing things right, ” said Kohlhoff. “We just came from a really good World Championship [finishing fifth] and that was not really expected as well.

“We had three good races today and everything went fine, it was fair racing. The current was not too bad and everywhere was at the same strength and I think the Race Officers did a really great job.”

Jason Waterhouse and Lisa Darmanin (AUS) put in a solid shift on the water and occupy third place. The day’s other race win went the way of Gemma Jones and Jason Saunders (NZL). However the Kiwis, who were overnight leaders, drop down to fourth overall following a third and a 13th.

Nacra 17 sailors are up-to-date with their schedule and will enjoy a day off on 18 August to re-charge their batteries for the second half of the competition.

It was a good day for American 470 sailors as Stu McNay and Dave Hughes grabbed the lead in the Men’s 470 and Anne Haeger and Briana Provancha put serious pressure on the overnight leaders in the Women’s division.

McNay and Hughes started the day off exceedingly well with a race victory. A ninth followed which subsequently handed them the lead by one point over Anton Dahlberg and Fredrik Bergstrom (SWE).

“We’re feeling good, ” commented McNay. “There are always opportunities to be better. Luckily the results thus far have taken care of themselves. This is a class where you have to pay your dues. There is a lot of nuance with the tuning, and the different modes available, but there’s always the opportunity to improve your tactics and strategy. The 470 is a fascinating class to sail, especially in a place like Rio.”

Haeger and Provancha put the pressure on overnight leaders Shasha Chen and Haiyan Gao (CHN) after a third and a sixth to sit within one point of them heading into the third day. The Chinese pair defeated the Americans by one spot in the opening race of the day but they came through in 13th in the second, which they discard.

Chen and Gao will look to keep mistakes at a minimum in the coming days but for Provancha, it was a well-executed day on the water,  “We’ve spent a lot of time down here and worked hard in the practice races to be able to form a game plan and get our communication on point.

“The plan is working. We are doing what we’ve been practicing, but we have a long way to go until next summer. Everyone is racing well, so we’re trying to minimize mistakes.”

Race wins in the women’s fleet were picked up by Marina Gallego and Fatima Reyes (ESP) as well as Hannah Mills and Saskia Clark (GBR).

The 49er sailors enjoyed four good races on the Pão de Açúcar racing area and Peter Burling and Blair Tuke (NZL) revelled in the conditions. Burling and Tuke took three race wins on the day and as a result have lifted themselves up to top spot. Their other result, which was an 11th, is their discarded score.

Several teams enjoyed good results on the day. Erik Heil and Thomas Ploessel (GER) sailed their way to a bullet and two thirds after a disappointing opening race where they came through in 18th. The Germans sit fifth overall.

Kings of consistency, Manu Dyen and Stephane Christidis (FRA) posted four results in the top ten and are sixth. Out of the 20-boat fleet they are the only crew who count a full scorecard of single figure scores.

The 49erFX fleet were scheduled to sail on the Niteroi course but light winds meant they were unable to sail on that course. With six racing areas being tested throughout the week the Race Management team have great flexibility with racing areas and the decision to move to the Pão de Açúcar course was made.

Pieter-Jan Postma (NED) picked up where he left off the day prior, at the top of the bunch. A second place in the single Finn race sees him retain his overnight lead.

Originally scheduled to sail on Copacabana, the Finn fleet were moved to the Ponte area and Tapio Nirkko (FIN) knew exactly how to play the course. Leading from the first mark the Finnish sailor barely looked troubled as he took out a convincing victory over Postma by 20 seconds,

Nirkko is second overall whilst a third for Jonathan Lobert (FRA) sees him tied with the Fin.

Heading into the day the Laser and Laser Radial sailors were prepared for a big challenge on the Pai course, the furthest racing area away from Marina da Gloria. Out in the open sea, big winds and waves were predicted but both failed to materialise.

In the end, the flatter waters of Escola Naval were used for a single race apiece.

In the Laser, Tom Burton (AUS) crossed the finish line 19 seconds ahead of Nick Thompson (GBR) for his first win of the week and as a result is seventh overall.

Tonci Stipanovic (CRO) holds onto his lead even though he finished in 16th place.

The Laser, Laser Radial, Finn and 49erFX will catch up on their schedule on 18 August whilst the 49er and Nacra 17 fleets enjoy a day of rest. The Men’s and Women’s RS:X will be back in the mix on Tuesday as they get down to the business end of the competition.