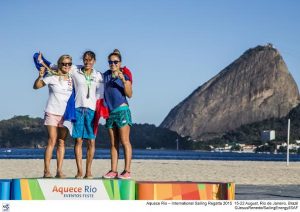 Directly translated to ‘never two without three’, the saying can be used both positively and negatively and that if something has happened twice, it is likely to happen for a third time.

After winning gold at the 2014 Aquece Rio and backing it up this year, Picon said through a shy smile, “jamais deux, sans trois.” If the saying goes, that third time will be at the Rio 2016 Olympic Games. 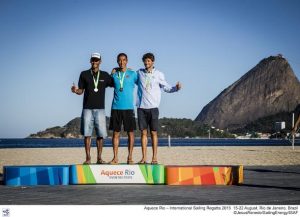 Picon ventured into the day tied on points with Poland’s Malgorzata Bialecka with Blanca Manchon (ESP) two points behind in the Women’s RS:X. It was to be a three way shoot out.

Stress levels were at their absolute highest with neither sailor fully grasping the 8-12 knot southerly breeze that was consistent throughout the afternoon.

Bryony Shaw (GBR) ran away with the race victory as the leading trio exchanged positions but Picon battled hard to remain in front of her rivals, finishing fifth to claim gold. “I was able to imagine the pressure at the Olympics, ” commented Picon on the high stress situation,  “so it was good for me to sail in a Medal Race like that. It’s important to test this. I would have preferred a good advantage, like I had in Santander [2014 ISAF Worlds], but you have to know how to manage yourself when it’s close.

“I’m very happy because this morning, it was so close with second and third. We were on the same points and Blanca was two points behind so I could have got gold, silver or bronze but I wanted to win.” 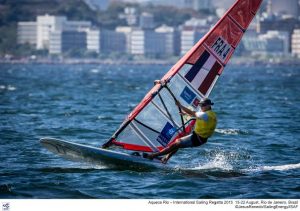 Both Bialecka and Manchon finished at the back of the pack claiming silver and bronze respectively. However, it could have been a different story after Stefania Elfutina (RUS) received a six point scoring penalty that result in her missing out on third.

But as Picon explained, it’s important to get in the habit and remove the errors now, rather than in one year, “It was a very good test event. We learnt a lot of things. We have to respect the rules, this is very important. This morning two girls took six points for being late to measurement so it’s very important to learn that this year so no one makes that mistake next year.”

For China’s Aichen Wang, the writing was on the wall, all he needed to do was finish in the top eight and gold would be his. Anything lower, then his rivals would have had to win to overthrow the pace setting Chinese sailor.

Going in with a 17 point lead Wang knew what had to be done but didn’t make things easy for himself as his Beijing 2008 Olympic gold medal winning coach Tom Ashley (NZL) explained,  “He made it very difficult for himself today to be honest. He didn’t have a whole lot to do because the point’s gap was pretty big.

“In the first part of the race he made a couple of mistakes and fell off as he got a big gust that slammed him. That didn’t make life easy. After that he sailed back through the fleet pretty well and finished fourth so it was alright.”

Ashley knows a good performance when he sees it; he’s put together the results required for glory himself and described Wang’s performance as one of the best he’s seen the day prior.

After racing Ashley summed things up, “I am unbelievably pleased. It’s been really good. We needed to lift our game about now. It probably came a little bit sooner than I expected but that’s great. It’s a nice step up and puts us in a good place a year before the Games.”

Byron Kokkalanis (GRE) and Pierre Le Coq (FRA) were well positioned in the leading spots heading into the day. Le Coq occupied second with Kokkalanis six points behind in third.

The Greek racer sailed his own race, coming through in second and had a short wait to see how things would play out behind him. As Le Coq came through in seventh it was silver to Kokkalanis who made amends for missing out on a podium place at the 2014 test event.

“I really wanted a medal, ” exclaimed Kokkalanis,  “and a silver makes me really happy. I had to defend my position and think about my tactics and get a good result. I managed to do that. I was leading at one point but came second to secure a podium.

“It’s good motivation having a good result in Rio this year. If you get a great result then you’re in a good position but the main thing today was putting in a good Medal Race.”

The 49er and 49erFX Medal Race places were decided on the Escola Naval course as each fleet reached ten races apiece over the week.

As things stand, Peter Burling and Blair Tuke (NZL) and Giulia Conti and Francesca Clapcich (ITA) are well positioned to claim gold with a 15 and nine point lead respectively.

Burling and Tuke couldn’t have asked for much more on the day, enjoying the breeze to post a 4-1-4-1 that hands them a cushion over Nico Delle Karth and Nikolaus Resch (AUT). The Kiwis have guaranteed themselves at least silver medal whilst the Austrians are guaranteed a podium finish.

The third placed Erik Heil and Thomas Ploessel (GER) have a bit of work to do in third place with teams in places 4-7 in with a shout of bronze.

In the 49erFX, Italy’s Conti and Clapcich have guaranteed themselves a podium finish which, as a result, books their ticket to the Rio 2016 Olympic Games. It was a mixed day for the Italians as they took a 2-4 alongside a DNF. Across the week the Italians have been consistent and whilst they discard the 20th, they count a tenth which is their only other double digit score.

Conti and Clapcich are nine points clear of Martine Grael and Kahena Kunze (BRA) and Lisa Ericson and Hanna Klinga (SWE) who are tied on 44 points.

Like the Men’s and Women’s Skiffs, the Laser and Laser Radial fleet racing drew to a close ahead of the Medal Race. Both fleets completed nine races across the week with two challenging races taking place on the Niteroi course.

Francesco Marrai (ITA) held on to his lead in the Laser even though he finished 32nd in the last fleet race of series. He discards the 32nd but counts the third he got in the first race of the day. The Italian is 13 points clear of his rivals and has all but guaranteed himself a medal.

Tonci Stipanovic (CRO), Tom Burton (AUS) and Jean Baptiste Bernaz (FRA) are separated by three points heading into the Medal Race which could prove clinical for Marrai as the three may fight it out for the remaining medals. Robert Scheidt (BRA) and Charlie Buckingham (USA) are still in the hunt as well, 11 points off Stipanovic and eight off Burton and Bernaz.

The Laser Radial has been an intriguing competition throughout the week and going into the Medal Race just three points split first to third.

Van Acker moved herself firmly into contention for a medal as she sailed her way to a 2-3. Railey has been consistent across the week and a 7-8 kept her in the hunt. Scheidt was on the receiving end of a scoring penalty in the first race of the day and discards the score. She held on to the overall lead though with a sixth in the last race of series ensuring it the deciding of medals will all boil down to the final double points race.

Jason Waterhouse and Lisa Darmanin (AUS) were able to hold on to first overall in the Nacra 17 with another disciplined performance. Two fourths and a discarded eighth hands them a five point advantage venturing into the Medal Race.

The Nacra 17 Medal Race is scheduled to commence at 16:00 on the Pao de Acucar course.

The 20-boat Finn fleet got in three good races on the Pai course and Pieter Jan Postma (NED) kept hold of his lead.

Postma opened up the day exceedingly well by taking the first race bullet and was able to maintain a high performance level in the next two races as a fourth and an eighth followed.

Jonas Hogh-Christensen (DEN) should have taken the second race win of the day but was pegged back by Giles Scott (GBR) who moved up the fleet as the race progressed. Scott claimed the bullet as Christensen followed in fifth. For Scott, his race win was sandwiched in between an eighth and a fourth which moves him to third overall and in touching distance of Postma.

Tapio Nirkko (FIN) continued his good form. A fourth, a seventh, which he discards, and a third solidifies his spot in second place ahead of Friday 21 August where two further fleet races will decide the Medal Race positions.

The Men’s and Women’s 470 enjoyed a great day of racing on the Copacabana racing area, completing three races apiece.

Mat Belcher and Will Ryan (AUS) showed why they are one of the best Men’s 470 teams in the world by producing a stunning performance that catapults them right back into the mixer for the medals.

A third and two outstanding race victories positions them nicely in second place, just a single point off of Sime Fantela and Igor Marenic (CRO) who sailed well on the day with a 2-5-(9).

Early pace setters Stu McNay and Dave Hughes (USA) had a tough time on the water as a (12)-10-8 drops them down to sixth. But whilst they’ll leave the boat park disappointed they know they have the capabilities and skillset to push back up as they sit just six points off of the podium places.

A bullet, second and a fourth enabled Hannah Mills and Saskia Clark (GBR) to jump up to first overall in the Women’s 470. Overnight leaders Anne Haeger and Briana Provancha (USA) didn’t have a bad day by any standards with a 3-3-(7) but Mills and Clark’s performance was enough to dislodge them from top of the perch.

Mills and Clark lead the Americans by three points.

Jo Aleh and Polly Powrie (NZL) took the remaining race victories and with an opening race eighth they move up to third overall.

Ahead of Saturday’s Medal Race, two fleet races remain and it will be game on for the sailors aiming to solidify their position and make the Medal Race.

The sailors have caught up with their schedule and the penultimate day of racing is scheduled to commence at 13:00 local time with the 49er, 49erFX Laser, Laser Radial and Nacra 17 fleets drawing their competition to a close.

Naming and shaming the pests…

Greelections’ suspense or what else for Greece?