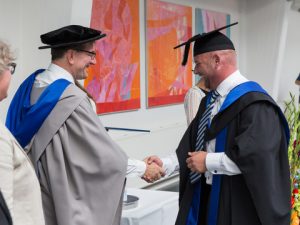 State-owned marine pilotage operation DanPilot can adopt a “simple strategy” to meet the challenges posed by the imminent scrapping of its monopoly, one of its most experienced managers has claimed.

The service must seize the opportunity to become a sustainable and competitive force, contends Søren Westerskov, whose maritime career spans more than  a quarter of a century, in his master’s thesis drawn up as part of his coursework for the Executive MBA in Shipping & Logistics at Copenhagen Business School. Mr Westerskov was among 38 participants in what is popularly known as the Blue MBA who graduated in August 2015, and he was awarded the prize for the best thesis, known as the Integrated Strategy Project (ISP),  in the Class of 2015.

His paper was starkly titled Will DanPilot be present beyond 2020? That is the year when DanPilot will be exposed to the full blast of competition. The organisation will have to weather the first changes in 2016.

In the thesis, Mr Westerskov says the prospect is that “in 2016 new players will most probably enter the transit pilotage market in Denmark and for the first time in history, DanPilot will meet competition on a broad front in the regional and transit segments of pilotage in Denmark.”

He says that when a competition-enabling law was passed in 2014, “it came as a shock to most parties concerned and not least to DanPilot.” DanPilot is an independent public enterprise under the Danish Ministry of Business and Growth, and which has the Danish Maritime Authority as its supervising authority.

The pilotage industry in Danish waters has in recent years seen many small providers llicensed under the Danish Crown, merged into one large pilotage provider, DanPilot, with a monopoly in the Danish Straits and ports.

The first step in opening the industry came in 2007, when the monopoly of pilotage in Danish ports was broken up. It was then only a matter of time, says Mr Westerskov, before the last bastion of the monopoly was challenged, dispelling doubts in some quarters as to whether the government had the courage to do so. 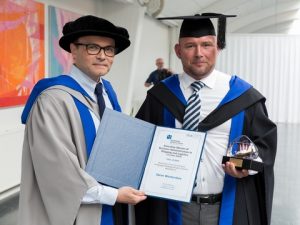 Mr Westerskov recounts that when he spent time in Oman, where he helped start a pilotage scheme in Sohar port for the Sultanate, he began investigating the interdependency of terminals, ships arriving and departing, port facilities, mooring gangs, pilots, tugs, the Vessel Traffic System, agents and authorities. “This made me seek information about these relations in the available literature with focus on pilotage. There was not much to be found.”

Equally, when he returned to Denmark he found that “there is really no literature which covers the Danish pilotage industry. “

He warns: “DanPilot is facing serious challenges on several fronts.Time has not yet run out, but the time available is limited. There is no reason that DanPilot should not be a powerful, sustainable and healthy pilotage provider by 2020 other than lack of understanding of the industry, the market and ability to adapt to the new circumstances.”

He adds: “DanPilot is owned by the state and my main concern in relation to future success is the interference of shifting political agendas rather than having a clear business focus. This applies over a broad front, from legislation to appointing management and board members.”

The biggest challenge would be for the company to remain by far the biggest player in the market. DanPilot should keep a constant focus on development of the external as well as the internal market environment.

While the quality of product delivered by DanPilot to customers is very high, it is associated with what Mr Westerskov terms “uncontrollable costs. It is reasonable to suggest that these costs are to be found in the supporting activities.”

A lack of strategy in relation to such costs “is most likely the reason why DanPilot is having big issues controlling costs, leaving the company hopelessly behind competition if this issue is not mitigated and solved.”

To meet this, Mr Westerskov formulates what he calls Strategy DanPilot 2020, which includes a list of Key Performance Indicators (KPIs). This strategy is summed up as: “We will continue delivering high quality services; we are cost focused; we seek close connection with our key account customers; we know our customers; and we are known for our commitment to national and international standards.”

The proposed strategy is simple, as are the action points, writes Mr Westerskov. The list of KPIs is very comprehensive but in the opinion of the author particularly relevant. To make the KPIs work it requires real insight into details and it requires involvement of the key accountable persons, he insists.

Mr Westerskov notes that over 10 years, employees have experienced the mergers of three local state-owned pilotages into one single national provider. Three chief executives have been introduced, “all with a notion that big and unified is good. However, now it seems that the idea is to split the pilotage industry again into smaller private units.

Amid the changes, the employee satisfaction index fell as has did that of the pilots. The worst case scenario for DanPilot would be a significant number of pilots leaving to competitors or starting a pilotage service of their own. “This is a genuine risk which has to be taken into consideration and dealt with objectively” as part of the strategy, says Mr Westerskov.

There would be revenue pressure on DanPilot. The fact that the transit segment is financing the regional segment might result in drastic measures. It was doubtful that optimisation of the operation alone could turn this situation round.

Most probably pilotage fees on the regional side would have to be increased by at least 30% to 40% as soon as the revenue in the transit segment came under pressure from competitors. This would affect ports and operators and could lead to abolition of pilotage there, especially for ships which are free to pass without pilot – typically smaller ships. The risk of groundings and damage in ports would increase. The consequence would be a demand from the stakeholders on the state (taxpayers) to support the regional segment financially. “But that was not the purpose of liberalisation, ” comments Mr Westerskov.

DanPilot had never worked out a strategy to deal with major changes in the business environment, pilotage industry or internal processes. Thus, it might be wise to consult resources outside the company that have a proven record in strategy work and implementation. The advantage would be to have someone asking the questions which employees would not ask lest there was a negative impact on their personal position in the company.

Mr Westerskov speaks of his firm conviction that DanPilot can succeed in becoming a sustainable and competitive asset in the Danish pilotage industry if the proposed strategy is implemented effectively.

At Blue MBA Graduation Day in August 2015, Professor Herbert Kotzab of Bremen University on behalf of the examiners awarded to Mr Westerskov the Integrated Strategy Project prize, which recognises the skillful application of theoretical and practical resources to generate findings directly relevant to a candidate’s particular business.

After a maritime career spanning 26 years, Søren Westerskov signed up to the Executive MBA in Shipping and Logistics (the Blue MBA) as a way of enhancing his management, leadership and strategy capabilities. A master mariner specialising in many aspects of pilotage and related management, Mr Westerskov has assisted some of the world’s largest ships.