The emergence of modern Arab art… 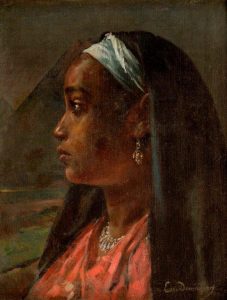 Creativity, a spirit of optimism, artistic daring – these may appear to be in short supply in much of the Middle East today, but a wonderful legacy of such qualities that reaches back into the beginning of the 20th century continues to resonate.

The flowering of art amid the old imperialism and the post-colonial era is magnificently represented in a new exhibition at London’s Whitechapel Gallery.

A collaboration between the Whitechapel and the Barjeel Art Foundation of the United Arab Emirates underlines the foundation’s role as a beacon in promoting the arts in the region and the London gallery’s ingrained and sympathetic internationalism.

Rarely does the UK have an opportunity to see such a rich variety of 20th century art from the Arab world.

The 38 works in part one of what will be a four-part series form an expressive mosaic rather than a narrative, but they are the markers of impressive and often moving stories (which can be followed up via the Barjeel website and with the help of the catalogue co-published with Prestel,  Imperfect Chronology: Arab Art from the Modern to the Contemporary (Works from the Barjeel Collection).

Many of the works though speak for themselves as things of splendour in their own right. One of the most beautiful is Nubian Girl, a portrait of a young woman by exiled Armenian artist Ervand Demirdjian. He is thought to have committed this to canvas between 1900 and 1910, the influence of French tradition and  the Western orientalists being clear.

Demirdjian was born in 1870 in Constantinople where he studied fine arts; after graduation he enrolled in Paris in the Académie Julian which was a progressive alternative to the official École  des Beaux Arts and thus popular with foreigners. There he met the orientalist Benjamin Constant, and  he spent much time admiring classic works in the Louvre. 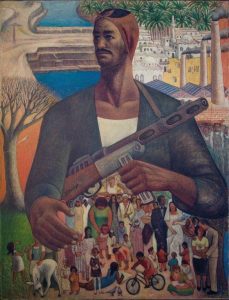 He returned to Constantinople but with the Turkish onslaught against Armenians underway, fled to Alexandria and then Cairo, where with many compatriots he led the squalid life of the refugee until he became established as an artist and teacher, with a reputation for depictions of life in the Egyptian capital and on the Nile. He died in 1938.

The ‘poster work’ for the exhibition is an allegorical painting by Iraqi Kadhim Hayder (1932-89) of weeping, luminous white horses which reflect the annual mourning rituals performed by Shiites to commemorate the martyrdom of al-Ḥusayn ibn Ali, grandson of the Prophet, in the Battle of Karbala, 100 km south of Baghdad. A lone green horse symbolises al-Husayn. Although completed half a century ago, the painting – based on a poem Hayder wrote the same year – looks remarkably fresh and up-to-the-minute. Its title is Fatigued Ten Horses Converse with Nothing (The Martyrs Epic).

Hayder studied art in Baghdad in the 1950s, and theatre design and graphics at the Royal School of Art and Graphics in London before returning to Iraq in 1962 to write and to paint in multiple styles, not shying away from analysis of turbulent political life in Iraq  in the 1950s and 1960s. 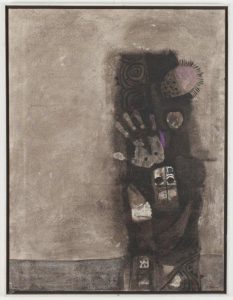 Mask of the Pretenders, 1966, oil on canvas, by Dia Azzawi. Barjeel Art Foundation.

Hamed Ewais (1919-2011) was even more directly involved in politics, in his native Egypt. In the Whitechapel selection, he is represented by one of his typically forthright works,  Le Gardien de la Vie (The Protector of Life) in which a machine gun-toting worker stands guard over men, women and children pursuing daily family life: even a bridal couple.

Ewais readily took to the revolutionary themes of the 1952 revolution and Gamal Abdel Nasser’s pan-Arab ideals. Among his works (not in this collection) were a  1957 oil on canvas Nasser and the Nationalisation of the Canal, a political act seen as symbolising the Arab world asserting its break from colonialism. Painting like this were meant to raise political consciousness and support among the populace for the regime.

Ewais had drawn the essence of his style from studying in Cairo in the 1940s at the School of Fine Arts artists including Picasso, Matisse and the Mexican social realists Diego Rivera and David Alfaro Siqueiros.

Iraq’s most prominent living artist is Dia Azzawi , born in the capital in 1939. Through his compelling abstract structures, he continues to address contemporary issues, notably the plight of the Palestinians, to which he drew attention with a series of paintings commemorating victims of the 1982 massacres at the Sabra and Shatila refugee camps in Jordan. He is well aware of the destruction that has been wrought on the artistic patrimony of his native land: he was for nine years director of the Iraqi Antiquities Department in Baghdad, before moving to London, where he has lived since 1976.

Another Iraqi theme is taken up by Shakir Hassan Al Said (1925-2004) with an oil painting on canvas,  The Articulate Cockerel. The cockerel wakes people in Iraq for morning prayers. The artist regarded artistic expression as an act of sacred contemplation, says the Barjeel Foundation.

Perhaps the most courageous of this magnificent cohort was the political activist and feminist Inji Efflatoun. She has six works here that speak of selfless struggle. Inji was born in Egypt in 1924 into an francophone family of landowners. She owed much of her determination to her divorced mother, a role model who defied expectations of women at the time by opening​ a fashion and textile boutique in Cairo. 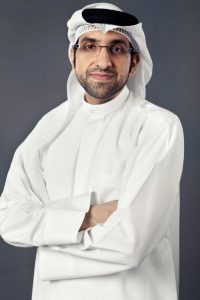 Inji was one of the first women to attend the Faculty of Arts at Cairo University and was unafraid to champion her feminist and political values, which led to her arrest, along with 25 other women, by Nasser’s police in 1959.

During her four and a half years in jail she continued painting, depicting the torment of women prisoners. A work of hers from 1957 is entitled Prisoners and recalls Goya’s truthful and sympathetic representations of the innocents during war. Five works are from the 1940s, ink on paper. One portrays the Dinshaway massacre, in which British officers in 1906 clashed with villagers whose pigeons they had shot for sport, and Egyptian and British judges exacted cruel punishment on the local people, further inflaming nationalist sentiment.

With an oil painting entitled Woman and Wall – the wall being a place for OAS graffiti – Mohammed Issiakhem (1928-85) starkly recalls his country’s striving for independence from the French.

The might of the Aswan High Dam and the toil of the building workers are shown in a painting by Ragheb Ayed (1892-1982) from 1964, the year the first construction phase was completed.

The exhibition is the first of a series of four chronological displays, which will be staged until January 2017, from the Barjeel Art Foundation which is based in Sharjah and was founded by Sultan Sooud Al-Qassemi in 2010 to look after and exhibit to the public his personal collection.

Whitechapel Gallery curators Omar Kholeif and Candy Stobbs have done a fine job in presenting the London show to effect.