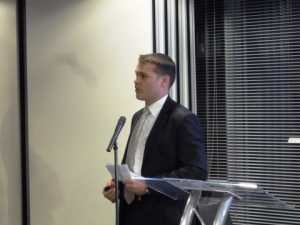 A NEW survey by The Shipping Professional Network in London (SPNL) has identified key ways in which London can remain competitive as a relevant maritime global centre, and revealed a broad consensus that London’s credentials in this respect would be strengthened by the UK remaining part of the EU.

The survey, organised in conjunction with international accountant and shipping adviser Moore Stephens, canvassed the opinions of young professionals working primarily in the shipowning, shipbroking, ship management, chartering, advisory and associated industries in London. Respondents were asked for their views of the current state of the market, and how they believed it would perform over the next 12 months.

Respondents recorded an overall confidence level of 6.2, out of a maximum possible score of 10, in the markets in which they operate. This compares with the rating of 6.4 recorded when the survey was run previously, in September 2013.

On a scale of 1 to 10, respondents expressed an overall expectation of 5.8 when asked to gauge the likelihood of their business making a major investment or significant development over the next 12 months. This compares with the 6.4 recorded two years ago.

Demand trends, competition, and the cost and availability of finance were identified by respondents as the three leading factors most likely to affect their business performance over the next 12 months, as they were in 2013 too.

48% of respondents expected finance costs to increase over the coming year, compared to the 44% who thought likewise in 2013.

Respondents were also asked for their opinion of likely rate movements in the tanker, dry bulk and container ship markets over the course of the next year. 35% overall thought that tanker rates were likely to increase, as against 50% in the 2013 survey. In the dry bulk sector, 35% of respondents overall expected rates to increase, down on the 45% recorded in 2013. 29% of respondents overall expected rates to rise during the next 12 months in the container ship market, compared to 31% in 2013.

Respondents identified competitiveness, taxation and the ability to adapt to a fast-changing environment as the three leading challenges for London to remain a relevant global maritime centre, as they were in the 2013 survey. Some urged London to establish stronger partnerships with Asian maritime hubs such as Singapore and Hong Kong, and to use this as a springboard to the rest of Asia. At the same time, London was cautioned not to let its best, most experienced people migrate to Asian maritime centres, and to be aware of the effect on its competiveness of operating and employment costs. London was acknowledged as one of the few European centres not in decline.

The cost of office space, staff and services was identified by a number of respondents as the biggest challenge to London remaining competitive. It was also acknowledged that more needs to be done in respect of stimulating shipping investment and providing ship finance, as well as supporting smaller start-ups. Improvements in transport infrastructure were also deemed to be vital to maintaining London’s competitiveness.

No fewer than 80% of respondents felt that it was in the best interests of London’s standing as a global centre for maritime commerce for the UK to remain a member of the European Union.

Claudio Chistè, chairman of SPNL, says, “The past two years have been extremely difficult for the international shipping industry, with world economies generally struggling to climb out of recession. But shipping is a resilient and robust industry which has a history of finding solutions to problems. Today, those solutions are provided by a combination of vastly experienced professionals and by new, young talent coming into the industry.

“The level of confidence expressed by young shipping professionals working in the London market has declined over the past two years, since SPNL first canvassed their views. This is disappointing, although not surprising given the events of the past two years. But it is still a result which would please a lot of other industries.

“Shipping faces serious challenges on a wide variety of fronts – from overcapacity, competitive pressure and environmental concerns, to political unrest and strict regulatory oversight. The industry has responded well, with its traditional blend of practicality and entrepreneurialism, and will doubtless continue to do so. This is one of the things which continues to attract talented young professionals into the industry.

“There are reasons to be cheerful. The net sentiment gleaned from our survey in terms of the prospects for rate improvements over the next 12 months is positive in the three main tonnage categories. Over 45% of the young professionals who responded rated the prospect of their business making a major investment over the next 12 months at 7 out of 10, or higher. That is not an indicator of a moribund industry; rather it is a vote of confidence.

“Shipping needs confident, young professionals willing to learn their trade at the ‘coal-face’. The question remains of where the coal-face should be located; the answer is that the industry needs more than one coal-face! It needs a number, in strategic parts of the world, with the ability to act both independently and in concert with each other.

“London has always been a leading centre of maritime commerce and expertise. In recent years, with the growth in technological innovation and the determination of other regional centres of expertise to expand their remit, London has had to face challenges to its pre-eminence as a global maritime centre, and our survey has helped to identify what are the most important of those challenges.

“Costs, on a number of different levels, must be addressed, and a global view taken at all times. In identifying these issues, SPNL hopes to help the UK address them. London’s maritime community needs a group of young professionals, and those professionals testify by their very presence in London that they want to be here. But they need to be in a London which is properly connected to the rest of the world, able to compete on a global stage and, moreover, in a London which is part of the EU.”

**Moore Stephens LLP is noted for a number of industry specialisations and is widely acknowledged as a leading shipping, offshore maritime and insurance adviser. Moore Stephens LLP is a member firm of Moore Stephens International Limited, one of the world’s leading accounting and consulting associations, with 626 offices of independent member firms in 103 countries, employing 26, 290 people and generating revenues in 2014 of $2.7 billion.