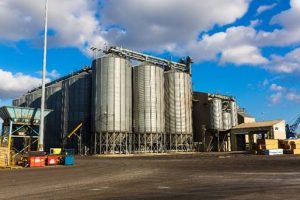 The Alexandra Silo Complex at the Port of King’s Lynn

Following extensive levels of investment in facilities, both ports enjoyed the highest number of exports in the month of August.

A strong harvest has seen more than 47400 tonnes on behalf of FennGrain and Openfield pass through King’s Lynn in August, surpassing the previous record by 715 tonnes. This follows significant investment by ABP and its customers in both storage facilities and handling equipment. As a result of this investment, handling speeds have doubled from 75 tonnes per hour, to 150 tonnes per hour.

In Ipswich, a record-breaking 119, 548 tonnes of grain were exported through Ipswich Grain Terminal and Clarkson Port Services facilities, beating a previous record of 107, 400 recorded in August 2003. The increase in grain exports follows a £2.2m investment in the state-of-the-art Orwell Bulk Terminal.

Nidera UK Operations Director Tim Capey said: “Our expansion and investment continues at a rapid rate reflecting the importance of Ipswich Grain Terminal to the region’s farmers as a major facility for the export of grain.

“The company is part way through a £1m investment programme.  In the last year alone, we have invested over £500, 000 in state-of-the-art intake facilities capable of handling 400 tonnes of grain an hour and a 32.5 metre mobile loading elevator to support shipside operations.”

ABP Short Sea Ports Director Andrew Harston said: “This impressive performance reaffirms both our commitment to the region and to delivering a high level of customer service. The grain season is only two months in, and we look forward to working with our customers to grow these numbers still further.

“Our investment in the East Anglian ports is continuing to reap benefits. The record numbers we have seen in August are a testament to the roles that ports play in supporting not just the region’s farmers but the wider UK economy, and underlines our commitment to keeping Britain trading.”

With the support of its customers, ABP’s Ports of East Anglia, King’s Lynn, Lowestoft and Ipswich contribute £340 million to the UK economy every year and support 3, 577 jobs in the region and 5, 000 jobs nationally.

Our five year investment programme is worth £837 million. Our investment is designed to respond to the needs of our customers whose business relies on our ports for access to international and, in some cases, domestic markets.