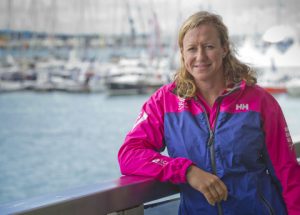 British Marine celebrated apprentices in the marine industry today (Tuesday 15 September) at its annual Apprenticeship Graduation Awards. It was joined by British Olympic sailor and member of the all-female crew of Team SCA, Annie Lush, who was on hand to give out the Awards, keen to reward the students for their hard work and ambition.

Now in its fifth year, the event received a selection of graduating apprentices from all areas of the industry, in roles varying from marine engineers’ to riggers and carpenters; recognising the diversity of accessible skills and careers in the sector. And for the first time, the Awards honoured one company as a ‘Game Changer’ for its achievements in the marine industry.

British Marine has been working with companies to support marine apprentices for a number of years to ensure that the industry, bringing £2.9 billion worth of turnover to the UK economy, continues to thrive. Most recently, it has been working with the Government and an industry working group, to develop a Trailblazer apprenticeship in boatbuilding.

Over the years, some of the biggest names in the marine sector have run successful schemes in a bid to develop their future workforce. This includes Sunseeker International, Hamble Yacht Services, Fairlie Yachts, Discovery Yachts and Berthon Boat Company, all of whom were present at the Awards. 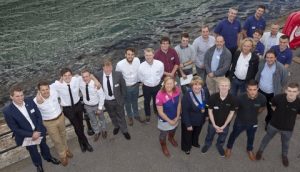 To celebrate these companies, British Marine today launched The Apprenticeship Game Changer Award which honours a British company who has made a significant contribution to the marine industry with the help of apprentices during the previous year. This year’s accolade went to Green Marine for its outstanding work on the Volvo Ocean Race V065 yachts. This high-profile project saw Green Marine’s apprentices develop invaluable skills whilst working with the necessary cutting-edge technology and materials to build all seven of the Volvo yachts – one of which Annie Lush sailed onboard. The event provided her with an opportunity to reminisce with the apprentices about her time racing in the Volvo Ocean Race presenting a video of her experience.

Annie Lush commented: “Showing the video makes the apprentices realise how much their work really counts. When you are out in the middle of the ocean you are relying on the boat for your life and you appreciate the hard work these young people put in.

It was great to meet the people behind the boat because we always say we have a much bigger team than just our team. I think it is really important that all the shore crew who are involved in the process feel part of it in the end.”

Howard Pridding, Chief Executive of British Marine, comments: “With over 200 apprenticeships starting each year, businesses within the industry have led the way in successfully integrating young people to become a key part of their core workforce. This has resulted in some real long term gains for the future of our industry. The British Marine Apprenticeship Graduation Awards has become an established occasion to recognise and thank the dedication of these apprentices.

As of this year, I am delighted that we have added the Game Changer Award, recognising the significant contribution made by a British Marine member company. Many congratulations to Green Marine on their well deserved win.”