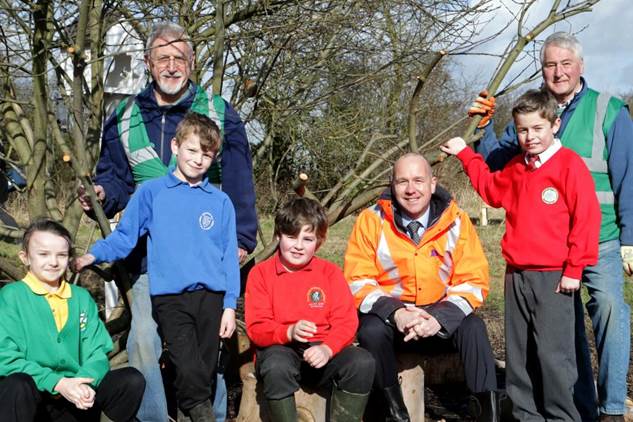 The town of Immingham is once again in the horticultural spotlight following its success in the East Midlands in Bloom competition.

The Immingham entry, which was supported by Associated British Ports (ABP), scooped the Gold Award and was category winner for the outstanding floral displays dotted around the town, its partnership working and sponsorship generation, and special mention was also given to the Washdyke Lane Conservation Area, which is also sponsored by ABP.

Mike Sellers, ABP Port Manager for Grimsby & Immingham was thrilled with the result.

He said: “We’re really proud to be a part of the community here in Immingham and we’re equally proud to have been involved in yet another successful in Bloom campaign for the town.

“I’d like to extend our congratulations to everyone who worked hard to make the Immingham entries a success and I’m sure we can look forward to even more awards in the future.

This is not the first time Immingham has enjoyed success in the prestigious RHS in Bloom competitions. The town won a coveted Silver Gilt award in the National in Bloom  event in 2014 – The RHS Britain in Bloom’s 50th Year – and the team was also awarded the RHS Britain in Bloom Young People’s Award, given to the finalist deemed to involve young people from across the community in the best way.

Elsewhere in the town, The County Hotel took the Silver Gilt Award in the Best Hotel/Pub Garden category, while the Immingham Community Recycling Centre on Queens Road was also awarded a Silver Gilt in the Best Retail/Commercial Category.

Alderney Way residents were recognised with a Judges Award for their well-maintained front gardens and open space featuring planters made from recycled materials. In addition,  Coomb Briggs Primary school gained a Gold award and a special award for the best ornamental garden in the whole of the East Midlands.

Town councillor Stewart Swinburn is the head of the Immingham in Bloom committee and has been instrumental in securing sponsorship for the town’s entries and for coordinating volunteers. The Town Council staff, in particular, head horticulture officer, Tracey Knight were key to devising ever-more creative themes and displays.

Stewart said: “This is the culmination of months of hard work from a huge team of committee members, volunteers, residents, schools and our business partners including ABP, who have all pulled together to achieve another fantastic result for Immingham.

“The town looks beautiful and the pride that this process instils in this place is evident wherever you go. I’d personally like to thank each and every person that helped get the 2015 in Bloom campaign to this point and I’m hoping they’ll be willing to do it all over again for the 2016 competition as we have some exciting plans for next year’s event.”