Protect the linguistic and cultural landscape amid the sweep of globalisation… 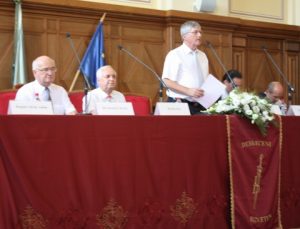 Protect the linguistic and cultural landscape amid the sweep of globalisation, churchman urges at Debrecen Summer School ceremony

A call to nurture and defend the languages spoken by small percentages of the global population was sounded at the opening ceremony of Debrecen University 2015 Summer School.

Civic, church and academic dignitaries had welcomed students as all gathered in the assembly hall of the university on a day of record temperatures.

The current academic body of the summer school and its predecessors over the past nearly 90 years, have earned praise for their role as vigorous champions of the Hungarian language and culture.

The 32, 000 students at the University as a whole come from 67 countries, making it one of the most culturally diverse institutions of higher education in Hungary. In the summer course in 2015, there were nearly 200 students from 41 countries participating over two or four weeks, said Dr Péter Szaffkó,  director of the Summer School.

Dr Szaffkó said that the school, founded in 1927, occupied a very important position in the life of Hungary. It had contributed to friendship and understanding among many nations. 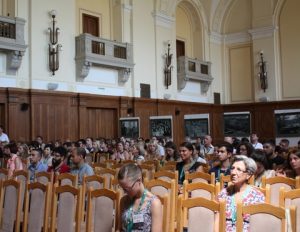 Section of the audience at the opening ceremony.

István Derencsényi , a leading representative of the East Hungarian Reformed Church district, said that there were 6, 000 languages spoken in the world, and the number was decreasing dramatically. The danger was that half would disappear within 50 years. “The language and culture of this small nation are worthy of preservation, ” he insisted. In the age of globalisation, we must take care of the language and culture of small nations.

Mr Derencsényi noted that the Church launched in 1538 the first institute of higher education in the city – the Reformed College of Debrecen – often referred to as “the school of the nation.” The college had a leading role in the preservation and development of Hungarian education and culture.

Indeed the college is seen as the intellectual ancestor of the university. The college and citizens of Debrecen founded a Hungarian Royal University in 1912, the same year that another such academy in Bratislava – the city was once under the name of Pozsony the capital of Royal Hungary, and today is the capital of Slovakia – was established.

Some of the Debrecen University faculties were located in the buildings of the Reformed College for a period, but in 1932 the main building of the University was finished and its departments and faculties became physically independent from the college. 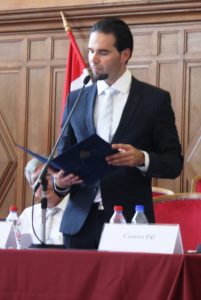 Today the university has 14 faculties. It is a city within a city, and anyone can become a temporary ‘citizen’ by signing up and being accepted for one of the summer courses.

At the opening ceremony for the summer school, Dr Elek Bartha, university vice-rector for education, recounted that it started out as the brainchild of professors at the university in 1927. The university had celebrated its centenary and now was one of the best schools of higher education in the nation.

Further, said Dr Bartha, it was among the 200 most prestigious universities in the world. This is according to the QS World University Rankings,  in the subject disciplines of modern languages and English language and literature. The ranking system is based on assessments of academic reputation, employer reputation, faculty to student ratio, research citations per paper, proportion of international faculty and proportion of international students. 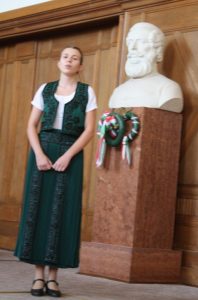 Dr Lajos Barcsa, deputy mayor of Debrecen, said that the summer school offered unique experiences that participants would not normally encounter as tourists.

Proceedings were rounded off with three folk songs touchingly rendered by Nelli Bíró, evoking links with the Hajdúság (the name of a former administrative district which consisted of seven so-called Hajdú towns, named after the Hajdús who were soldiers and cattlemen in the Great Hungarian Plain during the conflict with the Ottomans) and the Kalotaszeg region, an area with a large Hungarian population transferred in the 1920s to Romania  in which country it is known as Țara Călatei. She chose the songs Debrecen has a River,  Poródon a Békás, and The Linen Shirt.