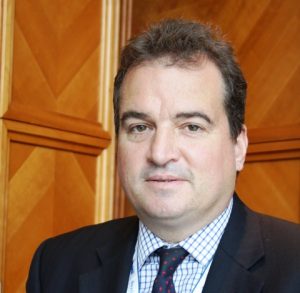 Lloyd’s underwriter Stephen Barr sees the marine insurance market as facing challenges on many fronts. These include the trend to larger sizes of ships, and the excessive amount of capital in the insurance market, says Mr Barr, who is marine director at Marketform Managing Agency.

Marine is a key component in the diversified book of specialty business written by Marketform as managing agent for Syndicate 2468, and is part of Cincinnati-based Great American Insurance Group, an affiliate of American Financial Group, which has assets of more than $45bn.

Interviewed following the 2015 annual conference in Berlin of the International Union of Marine Insurance, Mr Barr emphasised that IUMI was playing an important role on focusing the industry and its clients on the issues. “What we have done is to raise awareness, and give some steer to underwriters and claims managers as to how they can deal with these issues, ” said Mr Barr.

Mr Barr has been attending annual conferences of IUMI since 2000, and been a member of the association’s legal and liability committee since the 2005 conference in Singapore. Five years ago he succeeded Andrew Garger (senior vice-president and general counsel of New York-based marine pollution liability business Water Quality Insurance Syndicate), as chairman of the committee.  He worked closely with Mr Garger and other long-standing members of the committee to improve the quality of IUMI presentations and make the subjects addressed more eye-catching to the underwriting community.

“We were fortunate in managing to find speakers who breathed life into the topics, making some of the drier subjects a lot more interesting. Over the last few years, there has been no shortage of material!” said Mr Barr.

He went on to list some of those issues: “We have covered the subject of sanctions, and the sanctions issue is not going to go away. The market is focused very heavily on them, and we are all waiting to see what will happen in regard to Iran. We are expecting implementation at some time next year of the Joint Comprehensive Plan of Action to end the dispute with Iran over the nuclear question. This could present a lot of opportunities for the marine insurance market in that region in terms of providing cover particularly for cargo, ports and terminals.  Until implementation of the JCPOA though, our current stance on Iran will remain unchanged.”

He said that there have been many initiatives over the last 15 years that have made the maritime industry a much safer place. “We can see that in the number of hull total losses, but overall the complexity and size of vessels is creating much more of a challenge for underwriters to provide insurance solutions.”

Such solutions had to take account of the fact that casualties could be exceptionally costly and difficult to manage for political and geopolitical reasons.  “With mega-containerships trading round the world, there is a very real concern about what happens if a ship of that size has to be removed following a casualty. There are no cranes with the reach or capacity to take containers off the ship, and if the ship is listing or partly submerged it is very difficult to get containers off.”

Of the debate on places of refuge for ships in distress, Mr Barr described the European Union initiative to provide guidelines as “very positive” and said “it is all about encouraging the coastal states to give refuge. If we can get a stricken ship into a safe harbour, it could have a very significant impact on reducing or reversing a large environmental issue.”

On the complexities of removing stricken ships, Mr Barr said: “The industry, energy and marine, has been taken aback by the massive increase in the costs of wreck removal, as shown by the Rena,  MSC Napoli and Costa Concordia casualties. We have had many container ship fires, and total losses of vessels. Awareness has been raised of how to manage more complex casualties. The challenge is that these cases are likely to happen somewhere remote, where equipment is not readily available or is expensive to procure.

“Added to this is the threat of opportunists exaggerating claims and seeking to breathe life into the local economy.  We have seen this compounded by local governments circumventing international limitation convention provisions which underpin the insurance industry’s ability to provide sustainable insurance solutions for remote exposures.”

Hazardous cargoes continue to be an issue, particularly in regard to containers and this subject will be covered again at further IUMI conferences. Much attention will be paid to the liability of shippers for dangerous cargo, and to liquefaction of solid bulk cargo, said Mr Barr.

“I enjoyed my time on the IUMI legal and liability committee, particularly as chairman, ” he said. “Attendance at the workshops organised by the committee was fairly low when I started going to them, and progressively, year by year, we have attracted more people. I believe that Frederic Denefle (of Paris-based marine war risk specialist Garex) who is the new chairman of the legal and liability committee will see the work of the committee going from strength to strength.

“There are a number of conferences and forums held around the world, and I have been to many of them over the years.  I find that IUMI is good value in terms of what you can get out of it as a learning and networking experience. The executive committee has worked very hard to raise the profile of IUMI. The Berlin conference has been very well organised, and this is a fantastic location.”

In the period since Marketform became part of Great American Insurance seven years ago, “we have seen a lot of market challenges and changes. The continued growth of underwriting capacity [in the market at large] and pressure on rates are making it hard to deliver acceptable underwriting returns, but a number of businesses have managed to do so. Our strategy to deliver for our capital providers and our customers is to hire the best people, and retain the skills to have as big a leadership profile as we can.

“We are working in a very low-margin environment and there is no sign of that changing. That means we have to employ people who select the best risks and get us the best return on our capital in the most challenging situations.

“To that end we recently employed Alistair Marriott, who had previously been at QBE, as joint deputy head of marine and class underwriter cargo. Alistair brings with him leadership expertise in conventional cargo transit as well as stock business.

“We plan to continue carefully to grow our marine and energy liability offering, which has been a significant driver of profit in our portfolio.”

Mr Barr and his colleague Christopher McKellow continue to develop the marine and energy liability class at Marketform, while Angus Wilson is similarly working on the marine hull and war classes. Syndicate 2468 had gross written premium of £190.7m in 2014, and has £200m of capacity for the 2015 underwriting year. Marketform is administered from modern premises in Gracechurch Street, into which it moved in September 2014.

Determination of a Holocaust survivor and his grandson…