A ‘sea’ without waves but beset by mirages… 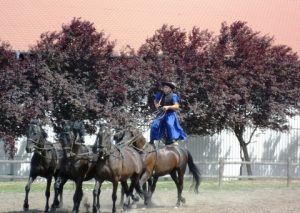 A ‘sea’ without waves but beset by mirages: the Puszta in Hungary and its mesmerising vistas

Europe’s largest grassland plain is far away from any shoreline, but it has stirred comparisons with the widest ocean expanses.

The Great Plain, known as the Puszta, of eastern Hungary, has at first appearance little connection with water. Its wetlands are much reduced since ancient times, and it is sparingly endowed with rivers, lakes and ponds.

To Hungary’s 19th century national hero Sándor Petőfi, considered too by his compatriots their greatest poet, the steppe conjured up the grandeur of the salty deep which he may never have seen with his own eyes (although he wrote on another occasion in the poem The whole sea has revolted a powerful description of merchant ships being pounded by a tempest, calling to mind the political storm assailing his homeland). 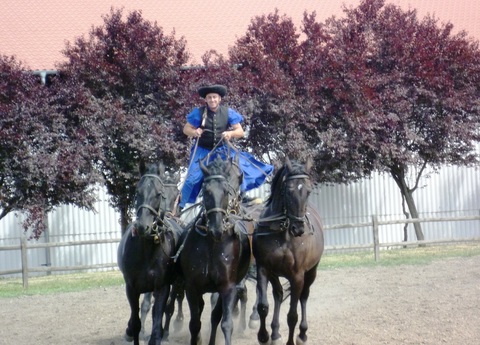 Petőfi declared of the Hortobágy, the extensive heart of the Puszta: “In lowland’s sea-like region, there is my own world, my home! My eagle soul springs from its prison bounds, when I behold the boundary of the plains.”

He was deeply moved by the flatland’s horizon which appears to stretch “forever.”

This is indeed an uplifting panorama, and a big contrast with the nearest city of Debrecen, notwithstanding extensive urban greenery and elegant period mansions. Few landscapes in Europe compare – the plains in the south of the province of Alentejo in Portugal might be called to mind, although the Iberian topography is a little more undulating.

To visitors who alight from their cars and coaches in the Puszta, there is “nothing to see” – scarcely a sign of human existence, for kilometre after kilometre. But like the ocean, the steppe spawns baffling mirages. These are usually images of animals, people and cottages, analogous to the ships and coastlines said to have been summoned up by Fata Morgana, the sorceress from the times of the legendary King Arthur of Camelot to lure seafarers to their doom. 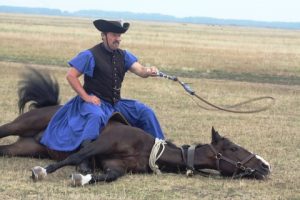 Obedience display on the plains.

The illusions are created by thermal inversion: shifting currents of air. Distances on the prairie can confuse themselves and us, even amid clear weather, and as at sea, sudden storms can blow up in summer or winter.

Petőfi was intrigued by the notion of Fata Morgana, writing of her that she is “the Puszta’s fairy child,  whose fond eyes gaze at him in yearnings wild.”

We have to say that during an hour-long horse-drawn wagon ride accompanied by a dozen other holidaymaking urban souls, we were spared the ghostly images, but we did see how the wild east is the stuff of cowboy drama and pastoral patrimony.

More than a century and a half after Petőfi’s reveries, the 81, 000 hectares of the Hortobágy National Park,  part of the Alföld (Great Plain), is Hungary’s largest conservation area. It was designated a national park in 1973 (the first in Hungary), and deemed a World Heritage site in 1999. 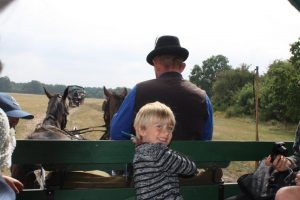 On ‘safari’ in Hortobágy.

It is described by Unesco as an outstanding example of a cultural landscape which “preserves, intact and visible, evidence of its traditional pastoral use over more than two millennia and represents the harmonious interaction between people and nature.”

The United Nations agency described the Puszta as “a complex mosaic of natural grasslands, loess ridges, alkaline pastures, meadows and smaller and larger wetlands (mostly marshes), which has presented ideal conditions for pastoralism since prehistoric times and which existed before the appearance of large animal-breeding cultures in this area.”

Indeed, treeless alkaline grasslands suitable for grazing dominated the landscape from the end of the Pleistocene period, enticing people from the east to migrate into the Carpathian Basin. 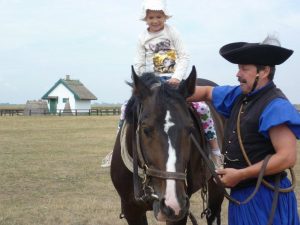 Herdsman treats a young visitor to a horse-ride.

The Hungarians arrived at the end of the 9th century in the lands around the Tisza River. Settlements in the Middle Ages followed the route between the trade hub of Debrecen and the lakeside village of Tiszafüred. By the early 13th century there was a network of settlements, with an economy based on pastoralism, but much was destroyed during invasions by Tartars and Turks.

Only a few seasonal shelters of reeds and branches remained. The most significant surviving structures from the 18th and the early 19th centuries are bridges, wooden wells, and csárdas, wayside inns providing food and lodging for travellers. Half a dozen of these inns remain, including the Hortobágy Inn which was originally a Customs house and post office.

From the mid-19th century, water regulation systems for flood defence partially drained the wetlands, converting them to grass, which was in turn affected by serious overgrazing early the following century. Efforts were made to diversify land use, the most successful of which was the creation of artificial fishponds between 1914 and 1918 and again in the 1950s; the fishponds being one of the current tourist attractions. 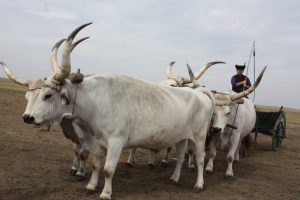 Big beasts of the Puszta.

Beyond the small towns on the fringes of Hortobágy including one named after the region, there is hardly any permanent population, but from April to October, hundreds of stock-breeders graze their animals. Tourists are shown their husbandry skills, distinctive mode of dress, customs and handicrafts. The cry of pastoralists the world over of “Don’t fence me in” is echoed and put into practice here.

Our tour passes one of the most photographed symbols of the Hortobágy,  the longest stone bridge in the country, and named the Nine Arch Bridge. Close to the Hortobágy Inn, the 167 m bridge – a much-marketed symbol of the Puszta – replaced in 1833 a wooden bridge built in the 14th century for crossing the road in times of flood. We learned that a Bridge Fair draws the crowds around August 20 every year – originally the fair was twice annually.

Jogging along further, our wagon draws up beside a herd of Hungarian grey cattle who take little notice of us intruders.

In the 16th and 17th centuries especially, the herds thrived on the fertile pastures fed by the regular flooding of the Tisza. Thus was born a huge export trade in cattle driven on foot to markets such as Nuremberg, Strasbourg, Venice and Vienna. Despite the length of the trek, the animals never lost weight, and the convoy never lost its way. 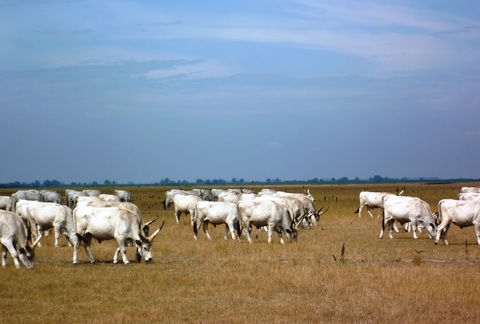 We learned more about this trade on another day, when visiting the small but intensely informative Postal Museum in Debrecen. Displays in the museum recount how members of the Butchers’ Guild, heading west with their herds of grey cattle, transported with them the town’s official letters in return for privileges, although after the 17th century the cattle drovers were legally obliged to provide this postal service. As the farmers were well armed to guard their animals from rustlers, the mail too was considered secure from theft.

(Following what is known as Rákóczi’s War of Independence which lasted from 1703 to 1711, which was the first major attempt to dislodge the Habsburg rulers from Hungary, the Habsburg Royal Post took over the postal service of the whole country. The first scheduled postal coach lines to transport both people and mail was initiated in 1752 by Maria Theresa, archduchess of Austria and queen of Hungary and Bohemia.)

The cattle drive helped establish important trade routes, one of which later became known as the Salt Road which connected Buda, Pest (later to be merged into the metropolis of Budapest) and Debrecen. Salt was carried on rafts from the mines of Transylvania and loaded onto farm wagons in the river (more recently lakeside) port of Tiszafüred. After the Turkish occupation, the road between Debrecen and Budapest via the Hortobágy, Tiszafüred and Szolnok was a vital artery. While lacking the glamour of larger museums, the postal museum warrants a stop for the insights it yields into the development of commerce, from the early days of the “butcher post” to the 1990s. A diorama illustrating an 1849 scene from a post office yard where a carriage stands ready for its journey and a reception counter from a northern Hungary village post office, are among centre-pieces.

Back in the Puszta, we pass the grey cattle with their long, upturned, curved horns, to inspect the racka sheep which have equally distinctive horns, up to 60 cm long. Apart from their corkscrew appendages, these hardy sheep are noted for their long, coarse wool.

A less ancient species is the red, curly-bristled mangalica pig (when we see them in the field, we queried the colour description of this long-haired creature, but our guide clarifies that the five-month old piglets at the time were “dirty red”).

After a while we stop to gaze at a group of water buffalo, a species brought by the Eurasian Avars during their Great Migration in search of safe pasture. If attacked, these buffalo can run faster than a horse, although they each weigh between 700 and 900 kg.

Speaking of horses, these are what the region is best known for internationally, especially those from Máta, the home of the Hortobágy Stud, established in 1671. Máta is one of the country’s top horse-breeding centres and today has 280 horses of the Nonius stock. The Nonius horse, which has a reputation for being a little stubborn, was brought to Hortobágy from Normandy at the beginning of the 19th century, and during the Napoleonic war in 1816 the Austrian army harnessed the services of this breed for artillery service. Since 2004 the Nonius horse has been designated a national treasure of Hungary. Sixty breeding mares at Máta ensure preservation of the genus.

With skills handed down from their ancestors, horsemen train their steeds to become accustomed to the crack of the bullwhip. Years ago bandits used the sound of the whip to rehearse their horses to stay calm when shotguns were fired by police giving chase.  Another trick of the riders emulated today was to command the horses to lie down and remain motionless to avoid being noticed by pursuers.

The most spectacular display at Máta is a daredevil act in which a single rider standing atop five horses circles an arena. Three of the horses gallop in front and two to the rear, where the rider plants his feet. The trick started after Ludwig Koch dreamed it up as an illustration he provided for a book he wrote in 1923. Seeing the picture, an accomplished Hungarian horseman, Béla Lénárd, took it as a challenge to perform the feat, which he did in Budapest.  Visitors gasp at the rider’s ability to control his horses while maintaining equilibrium, and admire how the mounts are made to speed faster and faster in unison.

The region is a habitat for 342 species of birds including the red-footed falcon, stone curlew, great bustard and aquatic warbler. In autumn, thousands of migrating cranes take a break by the Hortobágy fishponds.

Primarily by means of tourism, Hortobágy has economically survived the damming of irrigation waters and other changes which threatened to extinguish its special character. Flora and fauna mesh into an ecosystem of a kind sadly rare in Europe.