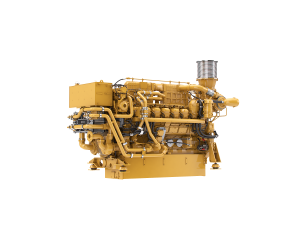 For Harley Marine Services, “green” has always been the way to go. So it’s no surprise that this marine transportation company headquartered in Seattle, Washington, was the first to select a Caterpillar Marine engine solution that meets U.S. Environmental Protection Agency (EPA) Tier 4 Final emissions standards.

“They have a reputation for being very sustainable and forward-looking, ” says Brent Nelson, a Caterpillar Marine territory sales manager who works closely with Harley Marine. “They want to run a clean, green fleet, and they’re setting a precedent by being the first to power a vessel with these engines.”

Recognized in the maritime industry for leading the way in environmental stewardship, commitment and initiative, Harley Marine has received numerous national and regional environmental awards, as well as adherence to the ISO 14001 environmental standard since 2008. The company also uses an environmental management system across all its operational areas.

When Harley Marine decided to build a new line haul boat, the Earl W. Redd, for towing up and down the U.S. Pacific Coast, the company wanted a proven power platform that would address the changing emissions requirements. Over the years, Harley Marine had successfully operated numerous line haul tugs powered by Cat 3500 Tier 1 and Tier 2 propulsion engines. Cat dealer Peterson Power suggested two 3516E engines —a flexible power solution that addressed both Harley Marine’s need for power and the upcoming Tier 4 regulations.

To meet the more stringent Tier 4 Final emissions standards coming in 2016, each of the two continuous duty 3516E engines—individually rated with a 10% horsepower increase of 2682 hp at 1600 rpm—is paired with a selective catalytic reduction (SCR) aftertreatment system. SCR uses a urea-based solution to reduce the oxides of nitrogen (NOx) contained in diesel exhaust down to nitrogen and water vapor. Just as important, it does so efficiently.

“Harley Marine should save over $1 million across a 15-year lifecycle on total fluid consumption (diesel plus DEF) costs for this new build compared to an equivalent Tier 2 powered vessel. They are able to deliver an increased level of performance due to the higher power rating with increased efficiency, ” says Ryan Darnell of Caterpillar’s Large Power Systems division. “That’s a direct result of engine fuel efficiency improvements that our SCR technology allows us to make by reducing NOx downstream of the engine combustion process.”

While that was a big reason Harley Marine chose Caterpillar for the Tier 4 Final engine solution, there were plenty of others as well. The company has a long-standing relationship with Caterpillar Marine, including parts and service support from dealers across the United States. In addition, Cat Financial has provided construction and ownership financing for multiple Harley Marine vessels—including the Earl W. Redd.

“Harley Marine appreciates that they can get the whole package from one source, ” Nelson says. “Caterpillar Marine is able to bring together multiple parties to make sure the design and installation is exactly what they need.”

For this particular vessel, that includes not just Harley Marine, but also Diversified Marine, Peterson Power, the naval architect and Cat engineers back at the factory. Currently, everything’s on track for the Cat engines to be delivered to the shipyard in April 2016, with vessel construction complete in October.

And with that, the newest—and greenest—addition to Harley Marine’s fleet will be ready to hit the waters along the Pacific Coast and beyond.

Caterpillar Marine, with headquarters in Hamburg, Germany, groups all the marketing and service activities for Cat® and MaK marine engines within Caterpillar Inc. The organisation provides premier power solutions in the medium- and high-speed segments with outputs from 93 to 16, 800 kW in main propulsion and 10 to 16, 100 kWe in marine generator sets. The sales and service network includes more than 2, 100 dealer locations world-wide dedicated to support customers in ocean-going, commercial marine and pleasure craft wherever they are.

More information is available at: MARINE.CAT.COM/pr

The Trumpet 14 Oct 2015 from VesselsValue.com