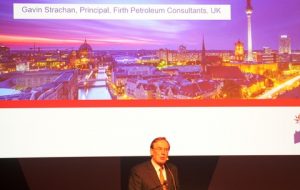 Investment in oil is needed now – in contrast to the cuts in spending being rushed into by the energy majors, according to a leading industry consultant.

Gavin Strachan, of Firth Petroleum Consultants of Bristol, told the International Union of Marine Insurance: “If investments are not made soon, production for the 2020s is in jeopardy.” The obvious source to fill the gap was the Middle East – Iraq could produce 50% of what was needed. 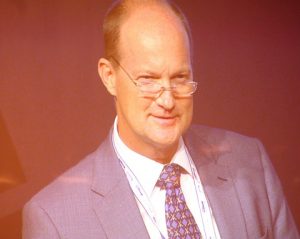 Speaking during the energy and offshore committee workshop at the IUMI 2015 Berlin conference, Mr Firth said that “the fundamentals of this business are astonishingly good, ” although there were so many variables that analysts were not going to get their oil price predictions right. One factor was that global population was rising, and fossil fuels remained essential to the energy mix.

The natural production decline from existing fields was 5% a year. By 2030 over half of existing global oil production would ‘disappear’, so there was a need to invest for another 50m barrels per day of new production…  “So at some point we need to see oil company production taking off.”  Mr Firth recognised that “oil companies will not set their objectives high until they can see clear profits.”

Oil company budgets were set at the end of each year for the following January-December. “If oil price expectation is poor when budgets are agreed, budgets will be set at low levels – they are not increased half way through a year.”

US shale oil was not as vulnerable as some thought, with estimated breakeven prices of around $60. Production was not yet declining although the rig count was down.

Paul King, of Indecs Consulting, London, said that with mature fields, the tendency is not to look at them for their replacement value but probably at what net present value was remaining in the ground.  “There is pressure on costs all over the place. You [underwriters] will be trying to put a lot more of the risk on contractors and off your own balance sheet. Since “the oil price dive” insurance costs had gone down drastically.

Among pressure points, in the US there would even be worries about the prospects of Donald Trump becoming president. Companies were losing a lot of staff, and the insurance manager could be replaced with some form of shared responsibility.

Bernt Hellman, global practice leader for marine and energy at Dual Underwriting, London, spoke of the impact on contractors. “Contractors can be some of the biggest businesses in the world, or three guys in Aberdeen doing overhaul of equipment.

“There have been bad times for contractors in the past.  This is probably going to be the worst.” We were losing the ‘baby boomers’ born in the 1940s and 1950s who built the industry the way it is today. “I do not think Opec is anywhere near the force that it was. The US is now pretty well independent when it comes to energy. Everyone is slashing assets… but medium term they are not going to have anything to slash. So you have to be able to drive value. That is where I think we as insurers will be challenged. We are the most reluctant of anyone to adopt change. When we have reduced premiums and more claims, we perhaps need to offer a wider product and a better product.” 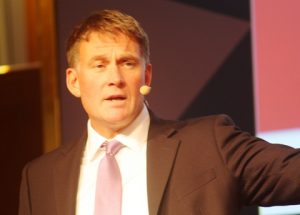 At some stage, there were going to be “a lot of business cards of people who used to work for companies that were great, but no longer exist.”

Saudi Arabia was increasing production but Opec still could not curb shale gas development “US energy independence is here.” Perceived value in all services would define relationships:  insurance and risk management would be equally scrutinised for added value

“Short–term balance sheet protection will not suffice in a highly competitive and cost-aware environment.”

Added value was required.  “Will a more comprehensive insurance product prove the differentiator?” The industry’s environmental impact would impact the future of the industry – in the event of a shale gas leak into an aquifer in Texas, or a Macondo [Deepwater Horizon-type explosion] in the Arctic, “everyone is going to hate anyone who is anything to do with oil and gas.”  Alex Harrison, group director of energy services at London Offshore Consultants of Perth, Australia, added: “My feeling is that the capex [capital expenditure] fall has some way to go yet.” At least 250, 000 jobs it was estimated had been lost in the oil and gas sector to date this year. Within that wholesale loss of personnel were a lot of senior technical people. Where oil companies have firm contracts, they were asking for reductions of something like 30%.

There were strong indications that we were entering a low-activity cycle. In insurance terms, claims volumes might not increase, “but the ratio of claims per project on those going ahead, might!”

“When the oil price recovers, there will be a rapid increase in activity. Initially, there will likely be a carry-over of project contracting and delivery strategies, price expectations and manpower resource shortage before equilibrium returns, ” warned Mr Harrison.

Simon Williams, chairman of IUMI energy and offshore committee, was asked how he saw prospects. “A hard market as in the past – no, but I should like to think a hardening market. We have painted a pretty gloomy picture, but the responsibility we have is to go over the facts as we see them. This is reality. I am afraid to say it is a pretty gloomy world – insurance, oil, company or contractor world.” Mr Williams said later at a press conference: “Our portfolios have been built on new projects.”

In his introduction, Mr Williams had said that this had been another year of relentless rise in “unnecessary” underwriting capacity. We have now touched on the $7bn mark – whereas a level of $5.5bn would have been more realistic. We just do not know where the bottom might be, in this marketplace. In 2012-13 the market had some fantastic results on the insurance and reinsurance side. But 2015 has already seen significant risk loss totalling more than $2bn, for example in Mexican, Falklands and Brazilian losses, and this could impact on 2014 profits. Last year saw cracks in the dam – in my view the dam has absolutely collapsed. We have been also faced with the collapse of the oil price. Risk management is being slashed, day rates are going down, drilling activity is way down, and a lot of our clients are looking hard at how much insurance they want to purchase. With all the issues facing our clients, are they going to be focused on maintenance, looking after their assets?”