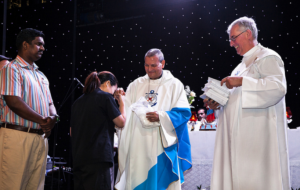 The Vatican Bishop charged with the pastoral care of seafarers visited the crew of the recently launched cruise ship MV Britannia on Friday 16th October, when it docked in Civitavecchia, near Rome.

The Britannia was named by HM The Queen on 10 March, 2015, in a ceremony in Southampton.

Some of the ships 1, 350 crew then joined the bishop in the ship’s theatre for Mass; with many of them coming from Catholic countries, this was a particularly poignant moment for them.

Bishop Joseph, who is Secretary of the Pontifical Council for the Pastoral Care of Migrants and Itinerants, which coordinates the global activities of AoS, then toured the 141, 000-ton ship.

Rev Roger Stone, Port Chaplain in the ship’s home port of Southampton, was also onboard and recounted how this visit underlined the Church’s unique care for seafarers through its network of port chaplains around the world and those that sail on P&O Cruises ships as cruise chaplains.

Roger said ‘the unique partnership between P&O Cruises and Apostleship of the Sea is greatly valued by crew, who know the chaplain is someone they can turn to both emotional and spiritual support.’  Roger had blessed the ship’s rail for all the crew on board on the day of her maiden voyage from Southampton in March.