Loss potentials have reached new dimensions as natural catastrophes increase dramatically in number and magnitude. This warning came during the 2015 conference of the International Union of Marine Insurance from Peter Höppe, head of Geo-Risks Research at the Corporate Climate Centre of Munich Re.

The gathering, in Berlin, was reminded several times that catastrophes could cause enormous accumulations of damage now that ports stored vast amounts of items such as motor vehicles, and ships carried record numbers of cars.

Prof Höppe declared: “Climate change is real. It can only be slowed down, but not stopped anymore. The insurance industry is directly affected by climate change in its core business and asset management, and has to adapt its risk models. More natural catastrophe insurance covers will become part of the adaptation strategies to climate change.”

Citing the 5th Assessment Report Working Group I (2013) of the Intergovernmental Panel on Climate Change he said: “Global warming is real!”

The IPCC is a scientific intergovernmental body under the auspices of the United Nations. Continental temperature changes were only explainable by the greenhouse effect. According to the US National Oceanic and Atmospheric Administration 2014 was the warmest year since records began in 1880. Nine of the 10 warmest years in the 136-year period of record have occurred in the 21st century. The first seven months of 2015 set a further record, with July the warmest.

Worldwide, the number of local record breaking monthly temperature extremes is now on average five times larger than expected in a climate with no long-term warming. 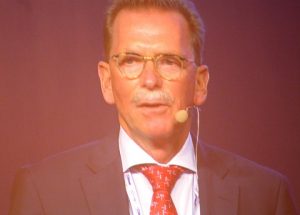 The heat-wave in Europe in August 2003 (a one in 500 years event) was the deadliest natural catastrophe on the continent of the last centuries: the economic loss was $ 12.8bn, insured loss $1.1bn, and there were 70, 000 fatalities.

The Munich Re expert said that regulation over carbon dioxide emissions could hit air and marine traffic. Ships were the source of about 3% of global CO2 emissions. More ambitious emission reduction schemes are to be expected after the Paris climate summit in December 2015. “The shipping industry and airlines may become part of new international emission trading systems, ” said Prof Höppe. “This will increase the costs of shipping and create pressure for a switch to more efficient and climate-friendly technologies. Sea level rise will increase risks of storm surges in harbours and will cause large future investment needs for ports to avoid such damage.”

On a positive note,   Prof Höppe said that the insurance industry “can support climate change mitigation and adaptation by providing new insurance solutions for climate friendly technologies, investments into clean energy and energy efficiency projects and the provision of knowhow on disaster prevention.”

He quoted a New York Times report of May 2014 that said: “Commercially available mechanisms such as insurance can also play a role in providing protection against losses due to climate change.” Prof Höppe said: “That sentence should have been in big, bold letters and underlined. In short, we need to worry about the potential for greater-than-expected disasters… That’s why global warming needs to be addressed by the private institutions of risk management, such as insurance and securitisation. They have deep experience in smoothing out disasters’ effects by sharing them among large numbers of people. Most important, we need concrete action now to build a mechanism that will provide real help for the victims of climate-change disasters.”

Both Prof Höppe and Franz Kasten, managing director of surveyors and loss adjusters Reck & Co, Bremen, referred to a hailstorm on June 20 2008 at the port of Emden, Germany, which demolished 30, 000 new cars. The damage was estimated to be up to € 100m.

A much more costly hail event was on July 27 and 28 2013 when hailstones with diameters of up to 11 cm (a tennis ball is 7 cm) struck Baden-Württemberg, causing an overall loss of € 3.6bn, insured loss of € €2.8bn and one fatality. The convective storm Ela which lasted four days in June 2014 was the third most expensive insured loss globally, hitting France, Belgium and Germany with winds up to 144 km per hour. The total Ela loss was € 2.5bn, insured loss €2bn, and there were six deaths. 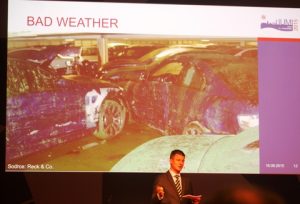 Mr Kasten focused his address on the accumulation risk in the automotive industry. He cited the case of a vessel of 8, 500 cars capacity (which has been dubbed a “swimming car park”) and 200 m long, twice the length of a football pitch. A cargo of cars would have an average value of $200m to $350m at factory sales price. Three affected decks with 600 damaged cars each, would amount to between $45m and $70m losses. Loose liquids such as battery acids could find their way into the lower decks, causing additional damage there.

He described the scale of Bremerhaven, the largest roll-on roll-off terminal in Europe. There would be 110, 000 cars in storage of which 45, 000 were in open space, 45, 000 covered and 20, 000 cars that factories would ship out at a certain point to improve their statistics, using the port as temporary storage. Some 800, 000 cars are exported through the port every year.  At an average of $40, 000 each car, the average in storage was up to $1bn.

When severe hail broke over the port of Emden, cars stored there had up to 30 dents each. There was no loading or discharge for five days, after which several weeks were needed to straighten out the schedule. There were delays in delivery to the client of up to three months. Direct costs were $100m, added to which were depreciation costs, and very unfavourable publicity.

David Taylor, chairman of the IUMI loss prevention committee, said that problems of the kind referred to by Prof Höppe and Mr Kasten were of concern worldwide. Mr Taylor added that more work on scenario planning based on man-made catastrophes might be achieved by the time IUMI met again in September 2016, in Genoa.

Problems in the transport and storage of perishable and temperature sensitive products were highlighted by Dr Yves Wild, of the Hamburg company Ingenieurbüro Dr Wild GmbH, experts in marine and refrigeration technology. Dr Wild said that there were 1.3m reefer containers in the world.

Pre-trip Inspections should be undertaken before each cargo shipment, said Dr Wild.

Information needed to investigate the cause of reefer claims included the bill of lading with temperature order, data logger content of the refrigeration aggregate (preferably the original data file with all recordings, temperature logs, event log and pre-trip inspection log), temperature recordings from instruments inside the cargo, temperature distribution within the cargo at the time of cargo survey, information about the cargo stow and packaging (from photos), voyage information, manual temperature logs from vessels and terminals, failure and repair reports, and the condition of the reefer machinery (manufacturer, type, model, age).

Matthias Galle, vice-president of the Fleet in Service department of DNV GL, spoke of container losses and Route-Specific Container Stowage. The classification society had been approached by container liner companies to consider the economics of container stowage.

DNV GL formulae needed updating for calculation of acceleration on deck containers to account for ever larger and wider vessels, those usually operating with relatively high GM (metacentric height, the initial static stability of the floating body) values.

The idea was to apply route-specific consideration to container lashing and stowage, which are common practice for project (non-standard) cargo.

What the society terms Route-specific Container Stowage is increasing safety, said Mr Galle. Introduction of mandatory approval of lashing computer system resulted in each loading condition being evaluated on a verified basis. Pressure by charterers to accept excess loading conditions could be countered by the ship master. Traceability of incidents was improved. Mr Galle said that DNV GL supported current IMO action over more reliable declaration of container weights.