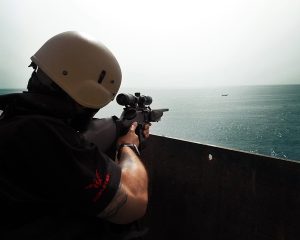 ESC Global Security (ESCGS) has welcomed the decision by the Contact Group for Piracy off the Coast of Somalia to reduce the size of the Indian Ocean High Risk Area, but warns the review could lead to a flood of weapons on to the black market as more PMSCs go bust.

ESCGS Chief Operating Officer Madis Madalik said: “The geographical reduction to the Indian Ocean HRA from 1stDecember is good news for shipping but my main concern is what will happen to the arsenal of very sophisticated weapons that bankrupt PMSCs have stored in floating armouries.”

It has been common practice for private maritime security companies to rent from or store weapons aboard floating armouries operating in international waters, but with more security firms expected to close in coming months their weapons could remain unaccounted for.

“The past four years has seen the number of licensed PMSCs more than halve, as companies reel from a reduced requirement for security aboard vessels transiting the Gulf of Aden, and more are expected to go under, ” said Madalik.

The International Maritime Bureau reported in July that in the first six months of 2015 no vessels had been attacked in the Gulf of Aden or Red Sea.

“If the floating armouries go out of business or if their clients are unable to pay to get their weapons back for decommissioning or proper disposal, then what will these armourers do with them: throw them overboard, sell them? This is a major concern, ” Madalik said.

“The lack of regulation here has the potential to irrevocably damage the reputation and credibility of the entire PMSC industry.”

The maritime storage of weapons is currently unregulated and while it is difficult to know exactly the number of floating armouries in operation or the security risks they pose, a number of the vessels used in this opaque sector of the industry will be flagged with registers that are blacklisted or, indeed, unlisted.

“There is certainly no register of vessels or barges operating as armouries and no inventories of the weapons they store, ” said Madalik, who estimated that about 15, 000 weapons and four million rounds of ammunition could be stored in Indian Ocean armouries alone. The weapons stored are typically small arms and semi-automatic, long-range rifles.

“This is a serious issue and one that is being addressed at an international level, ” said Peter Cook, Chief Executive Officer of the Security Association for the Maritime Industry (SAMI).

The report Floating Armouries: Implications and Risks,  commissioned by the Remote Control Project and published in December 2014 found that “none of the vessels currently used as floating armouries have been purpose-built as an armoury, instead, they are adapted craft. As a result, vessels may not have safe and secure storage for arms and ammunition”.

The report concluded: “Floating armouries are likely to continue to be a feature of the modern response to maritime security threats. Whilst such vessels may have originally been deployed to the Indian Ocean, their mobility means that they are easily re-deployable around the globe. An international response is required from the International Maritime Organisation, or another body, with the task of monitoring all floating armouries and the companies that operate and use them.”

The first steps to regulate the weapons rental market are being taken with flag states beginning to implement measures to ensure the weapons used are only those owned or licensed by the PMSC hired by the shipowner.

However, while this might help towards preventing the use or rental of “unlawful” weapons, it is likely that the vessel’s master will become responsible for checking license documents against weapon serial numbers prior to security personnel boarding the vessel.