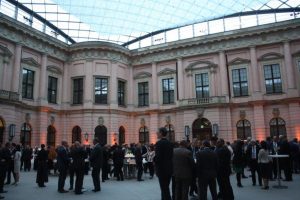 Marine underwriters and their guests were invited to two Berlin venues steeped in history, for the main social events of the 2015 conference of the International Union of Marine Insurance.

The conference welcome reception was in the magnificent courtyard of the Deutsches Historisches Museum (German Historical Museum), within the oldest building on Unter den Linden,  which is doubtless the most magnificent boulevard in the capital.

IUMI president Dieter Berg gave a short history of the building, which was originally known as the Zeughaus, or armoury. Begun in 1695 for Elector Friedrich III, the structure is considered the most important surviving Baroque edifice in the city. After the German Empire was founded in 1871, the building was rebuilt as the Pantheon of the Brandenburg-Prussian Army.

Turned by the Nazis into their Army Museum, the place was bombed towards the end of World War II, and reopened in 1952 by the former German Democratic Republic as the Museum für Deutsche Geschichte. It became the home of the Deutsches Historisches Museum after German reunification.

During the IUMI reception in the magnificent courtyard, groups of guests were taken on guided tours of the first floor displays of paintings and artefacts relating to the establishment of the German Empire, the tragedy of World War I, the failed revolution of 1918, the founding of the Weimar Republic, and the key role in society achieved by Jewish businesses and later pogroms against Jewish families. These were just a few of the 8, 000-plus objects of national historical interest held by the museum.

In his welcoming remarks, Mr Berg said that although Berlin was far from the sea, it had been “built on barges” – a reference to the importance of the inland waterway system and the Rivers Spree and Havel as trade routes. The city claims to have the oldest canal north of the Alps.

Mr Berg said that Berlin had famously been called “poor but sexy” – be that as it might, the city had a wealth of attractions for the visitor.

On behalf of the conference organising committee of the German Insurance Association (GDV), Dr Marcus Kremer added his greetings. Dr Kremer is chairman of the marine loss prevention committee of the GDV. He said that the GDV was proud to welcome “a truly intercontinental conference.”

Mr Berg and Dr Kremer thanked the raft of sponsors for their invaluable support.

Conference sessions were in the modern InterContinental Hotel, close by the Tiergarten, a vast expanse of mainly greenery originally a hunting ground outside the city walls for the Electors of Prussia.

Three days after the welcome get-together, IUMI-linked events were rounded off by the “Evening of the host” in the extensive main hall of the former Tempelhof airport. Dieter Berg again extended a welcome and briefly related the history of the site. The aviation connection began in 1909 when pioneer aviator Orville Wright organised an air show at Tempelhofer Feld, a former parade ground. 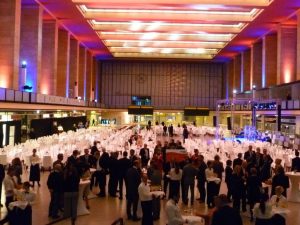 Built in 1923, Tempelhof became Germany’s largest airport and the most modern in the world. It was closed in late 2008, and the building is now used for special events such as grand dinners, festivals and trade fairs, while the grounds became a public park, and part of the site was most recently earmarked as temporary accommodation for some of the new wave of refugees. The eagle-decorated structure was once called by British architect Norman Foster “the mother of all airports.”

Its greatest post-war glory came as the chief landing place for the airlifts that beat the Berlin Blockade. After the British, French and Americans combined their occupation zones in 1947, the Soviets sought economic guarantees, and when talks broke down, they blocked the roads and rail lines into West Berlin. In response US and British planes performed a total of 212, 612 flights, transporting almost 2.3m tons of essential goods for the residents of the western part of the city.  During the operation, 77 aircrew and several ground staff lost their lives in accidents. The huge logistical campaign eventually persuaded the Moscow to end the blockade.

Tempelhof dwindled in importance after Berlin Tegel airport was opened in 1975, and handled its last flight 13 years later.