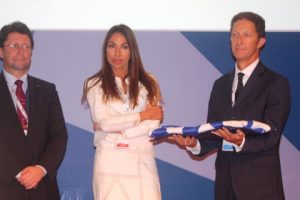 Members of the International Union of Marine Insurance have already begun preparing for their next annual conference, which will be in the Italian port city of Genoa from September 18 to 21 2016.

It will be the sixth time since 1946 that the Italian Insurance Association has hosted the IUMI conference, and the second time for the gathering in Genoa. 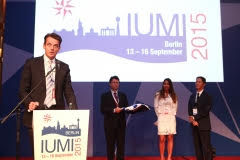 Cristina Castellini of ANIA – Associazione Nazionale fra le Imprese Assicuratrici – who will be lead organiser supported by an ad hoc organising committee – invited everyone present at the 2015 Berlin IUMI conference and their underwriting colleagues to help make the Genoa event another resounding success.

Ms Castellini referred to the great maritime history of Genoa: it laid claim in the 11th century to be the Queen of the Seas, and the poet Petrarch, who visited in 1358, had dubbed it Genova La Superba, Genoa the Proud One. 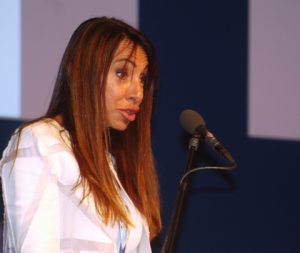 She said that Genoa had possessed one of the largest and most powerful navies in the Mediterranean. The leading personalities and splendid architecture of the city had attracted the visit of many great artists including Rubens, Caravaggio and Van Dyck.

Genoa was a European City of Culture in 2004 and among its attractions are the substantial maritime museum, and Europe’s largest aquarium. The aquarium has 71 tanks containing more than 15, 000 fish and animals of 400 species. Located on the ancient wharf of Ponte Spinola, the aquarium was inaugurated in 1992 during celebrations of the 500th anniversary of the discovery of the New World by Christopher Columbus, who was born in the Republic of Genoa, the son of a weaver, in 1450 or 1451.

Genoa, which has many fascinating buildings dating from the 16th century, is a noisy, colourful Mediterranean port, breathing a cosmopolitan air, said Ms Castellini.

There are many reminders of its merchant reputation and sea power from the years it colonised much of the Mediterranean and even part of the Black Sea. Today it is Italy’s busiest cargo port and has extensive cruise ship and ferry quays. 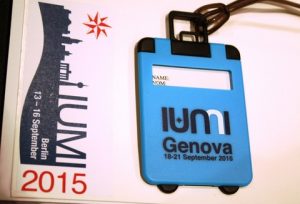 Ms Castellini reminded the audience that the last IUMI conference in Genoa faced a stern test as it came just days after the 9/11 terrorist attacks in New York, which had a severe effect on airlines, travel security and the insurance business, leading to a decision by several IUMI member associations to stay at home. Despite that, at the close of the 2001 conference the then president of IUMI, Richard DeSimone, had declared movingly in a video-link statement from the US that the Genoa assembly would be remembered for many things not the least of which was the spirit of co-operation and teamwork demonstrated by all those attending.

The venue for the 142nd IUMI conference will be the waterfront Magazzini del Cotone, the main structure of the Porto Antico Congress Centre. The 1926-built former cotton warehouses were transformed in 1992 by architect Renzo Piano into a convention facility with a large, divisible auditorium and 13 other rooms, with outdoor space along the Molo Vecchio quay.

A short distance from the Porto Antico is the Palazzi dei Rolli, a Unesco World Heritage area, mansions which in the 16th century were on the roster of guest-houses for visiting dignitaries.

Renzo Piano has said: “Genoa is an industrious city. Our sea is not a postcard image; it is a hardworking sea. Genoa is not a mausoleum; it is alive and has a constructive relationship with its port. Ours is a hidden beauty, shy, self-examining.”

Dr Marcus Kremer, a member of the Berlin IUMI organising committee and chairman of the marine loss prevention committee of the German insurance association GDV, invited Ms Castellini and Alessandro Morelli of Siat SpA Unipol Group to the platform, where his GDV colleague Matthias Kirchner formally handed the conference flag to the Italian representatives.