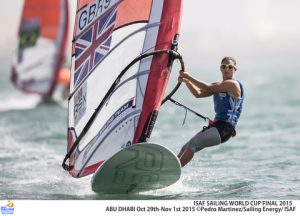 The 2015 ISAF Sailing World Cup Final produced a fascinating opening day in Abu Dhabi, and it was business as usual for several of the defending champions setting out again on a gold medal course.

Great Britain’s Bryony Shaw made the perfect start in her pursuit of a second successful World Cup Final title at Abu Dhabi Sailing and Yacht Club (ADSYC), taking the first race win in the Women’s RS:X ahead of Brazilian Patricia Freitas and France’s Hélène Noesmoen.

Shaw followed up with a second place and another victory to lead by one point at the end of the day from Flavia Tartaglini of Italy who recorded finishes of 4th,   3rd and 2nd, and last year’s champion looks determined to hold on to her crown.

“It was fun sailing out there, nice offshore, windy conditions, ” said Shaw. “It was great to get some speed in the wind but still there was pressure to not get stuck in the light winds. I feel like I had a good day’s sailing today. I’m here to try and win the gold medal so it’s great to already be ahead.”

Australian Tom Burton is another who clearly enjoys the conditions in Abu Dhabi. The defending champion scored one race win and a second place to lead the 20-boat Laser fleet from five-times Olympic medalist Robert Scheidt of Brazil who picked up a pair of third places.

Lying fourth is first race winner Jesper Stalheim from Sweden, and there is plenty of racing ahead in the Laser class as the chance for the athletes to discard their worst race result kicks in tomorrow. In the Laser Radial Holland’s Marit Bouwmeester leads on four points after one race win and a third place finish. The day’s other race win went to Great Britain’s Alison Young, but a 12th in the second race leaves her in 7th overall. 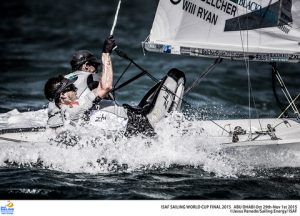 Sponsored by ADS Securities and Abu Dhabi Tourism and Culture Authority, the ISAF Sailing World Cup Final sent 144 competitors from 37 countries into action at ADSYC to contest eight of the ten classes chosen for next year’s Olympic Games in Rio de Janeiro, as well as an open kiteboarding competition.

With a strong breeze blowing in from the land from early morning, the organisers brought the start of the first day’s racing forward by two hours to take advantage of excellent sailing conditions.

There was also an opening race victory for the defending champions in the fiercely contested Women’s 470 class. Lara Vadlau and Jolanta Ogar led from start to finish and took the first race win by 17 seconds from London 2012 Olympic silver medalists Hannah Mills and Saskia Clark and the gold medal winners from the World Cup qualifying regatta in Qingdao, China, Ai Kondo Yoshida and Miho Yoshioka.

But fortunes can change quickly and in the second race Vadlau and Ogar were disqualified after making a false start and finished the day down in fourth overall. Leading the class are Kondo Yoshida and Yoshioka who won the second race of the day.

Squires followed up with a third place in race two as Kokkalanis finished runner up again – this time to Britain’s Joe Bennett – and the pair completed the day sharing the lead in the class on four points each. Italian Mattia Camboni won the third race and is third overall.

Squires said,  “It’s been a really good day, nice and windy. We’ve had up to 15 knots, it’s really been quite lovely actually. I have to play my cards right tomorrow. It will be a good day of sailing. I’m favouring windy conditions so I hope for the best for tomorrow.”

In the 49er, the Polish combination of Dominik Buksak and Szymon Wierzbicki snatched two second places and discarded their 7th position in the third race to lead on two points from ISAF Sailing World Cup Miami gold medallists Nico Delle-Karth and Nikolaus Resch of Austria. Ending the day in third place were the first race winners, Italy’s Stefano Cherin and Andrea Tesei.

There are no bigger favourites for gold in the UAE capital than multiple world champions Mat Belcher and Will Ryan, although the Australian duo had to come from behind to land the opening race in the men’s 470 class. Down in third at the first mark, they eventually came through to victory by 29 seconds from Austrians Matthias Schmid and Florian Reichstädter, with Americans Stuart McNay and David Hughes in third.

In race two the Aussies were beaten into second place by McNay and Hughes but lead the Americans by a single point at the end of the day. In the Finn class Great Britain’s Edward Wright leads the way on four points following a first and a third position in today’s two races, heading Ivan Kljakovic Gaspic of Croatia who won one of them.

The open kiteboarding event continued through the afternoon off the Corniche in Abu Dhabi as defending champion Oliver Bridge of Great Britain aims to defend his title.

After three days of fleet racing, the top ten athletes from each of the eight Olympic sailing classes, as well as the open kiteboarding competition, will move forward into Sunday’s medal races to decide who leaves Abu Dhabi with World Cup gold, silver and bronze.