Battle for gold heats up in Abu Dhabi 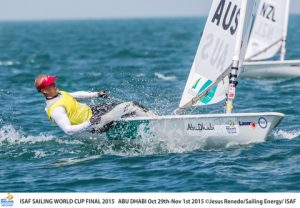 The battle for gold in the 2015 ISAF Sailing World Cup Final is turning into a classic contest of skill and concentration in Abu Dhabi, with the sport’s top athletes turning on a spectacular display in near perfect conditions.

The second day of the Sailing World Cup grand finale brought offshore breezes of 9-13 knots at Abu Dhabi Sailing and Yacht Club (ADSYC), and the cream of the Olympic sailing classes were in their element.

It was another good day for Great Britain’s Bryony Shaw, defending champion in the Women’s RS:X, who followed up her second place in the first of the three races with victory in the last to hold a two-point overall lead from Italy’s Flavia Tartaglini, the second race winner.

Shaw commented on here day saying,  “It’s about keeping everything simple and minimising mistakes, as I made a few today. We might have a different breeze tomorrow so I will be racing smart and keeping my energy levels as good as they can be.” 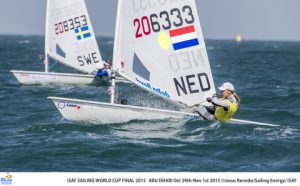 This is proving to be one of the most competitive of the eight Olympic sailing classes being contested in the UAE capital’s World Cup regatta, which is sponsored by ADS Securities and Abu Dhabi Tourism and Culture Authority.

Brazilian Patricia Freitas is another with her sights still on the World Cup gold after a win in the opening race helped her to third at the end of the day.

Australian Tom Burton, leading the 20-boat Laser fleet overnight, once again showed his liking for conditions in Abu Dhabi, and second place in the day’s opening race won by German Philipp Buhl saw him extend his advantage to 3 points over Robert Scheidt, the five-times Olympic medalist.

In the Laser Radial Netherland’s Marit Bouwmeester won the first of two races from Josefin Olsson and, after discarding her 8th position in race two, ended the day leading the Swede by three points. 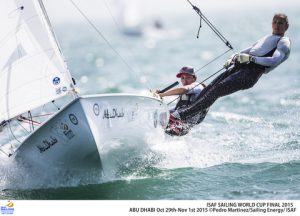 Second race winner Tatiana Drozdovskaya of Belarus was down in 7th overall, while Belgium’s defending champion Evi Van Acker continued to have a difficult title defence, her 3rd and 11th positions on the day leaving her in 5th overall.

Austria’s defending champions Lara Vadlau and Jolanta Ogar are having a great battle with Hannah Mills and Saskia Clark in the Women’s 470 class, and there is nothing between them after two days of fleet racing.

The first day of the regatta had been a mixed one for Vadlau and Ogar, as their opening win was followed quickly by disqualification for a false start in race two.

They reclaimed the outright lead by winning today’s opener from Mills and Clark who were placed third. But the British girls reversed the positions in the second race to draw level with last year’s gold medalists. Japan’s Ai Kondo Yoshida and Miho Yoshioka are third after a 4th and 2nd place.

Ogar described her thoughts on the early starts and her class competition by saying,  “The wind was really nice today but it’s the hours we struggle with, we don’t like sailing so much in the morning. The wind conditions were perfect with some great waves. The GBR girls are a good team and it’s good to be so close to them – we like them.”

Great Britain’s Tom Squires stayed on course for gold in the Men’s RS:X when he snatched victory in the last of the day’s three races after earlier 7th and a 2nd place finishes.

He leads by four points from Spain’s Ivan Pastor Lafuente who followed his opening race win with a pair of 5th place finishes, with Brazilian Ricardo Santos in third after a run of 3rd, 4th and 2nd.  After an opening second position, Byron Kokkalanis of Greece, last year’s silver medal winner, slipped to 7th and 9th to finish the day in 5th.

Another intriguing contest for gold is developing in the 49er class, with Poland’s Dominik Buksak and Szymon Wierzbicki tied at the end of the day with Italy’s Stefano Cherin and Andrea Tesei.

The Poles followed their first race win with two 4th positions, while Cherin and Tesei fitted a race victory in between two 2nd places. British brothers Rory and Neil Hunter climbed to third by taking the third race of the day.

There are still two days of racing left, but already multiple world champions Mat Belcher and Will Ryan are looking good for another pair of Men’s 470 World Cup gold medals in Abu Dhabi.

Finishing second in today’s first of two races to Sweden’s Anton Dahlberg and Fredrik Bergström, the Australians won race two to earn a four-point advantage over Americans Stuart McNay and David Hughes who’s opening 4th place was followed by a disappointing retirement. Dahlberg and Bergström are another point away in third.

Croatia’s Ivan Kljakovic Gaspic is clearly enjoying conditions in Abu Dhabi, scoring victory in both of today’s races in the Finn class to take a 4pt overall lead from Britain’s Edward Wright and Turkey’s Alican Kaynar who are tied in second. Consistency seems to be the theme in this class, as Wright was third in both of today’s races while Kaynar collected a couple of second places.

The open kiteboarding event was continuing through the afternoon off the Corniche in Abu Dhabi as defending champion Oliver Bridge of Great Britain looked to add to his hat-trick of race victories from the previous day.

After tomorrow’s third day of fleet racing, the top ten athletes from each of the eight Olympic sailing classes, as well as the open kiteboarding competition, will move forward into Sunday’s Medal Races to decide who leaves Abu Dhabi with World Cup gold, silver and bronze.