Sea shanties are alive and well and living, among other cities, in Berlin! Executives of the mighty Munich Re insurance and reinsurance group harboured a musical surprise at a social evening for their guests, marine underwriters attending the International Union of Marine Insurance 2015 conference, in the German capital.

The Munich Re team organised coaches to take invited delegates and friends through some of Berlin’s historic districts to a trendy restaurant, Spindler & Klatt, on the banks of the River Spree.

‘Our pilot through all shallows, ’ choir director Volker Groeling.

After a generous selection of aperitifs, the guests took their seats for dinner and entertainment, first a warm-up group and then the magnificent Shanty-Chor Berlin. This choir is made up of more than 40 mainly ex-shipping people, mainly retired men, and the accompaniment of accordion and guitars.

The Shanty-Chor (which greets you with melodious choral charm as soon as you tune in to the website www.shantychor-berlin.de) exudes captivating harmonies in English and German. The vocal enthusiasts fulfil their motto Out of Passion to the Sea by pouring hearty energy into their wide repertoire of shanties and ballads. 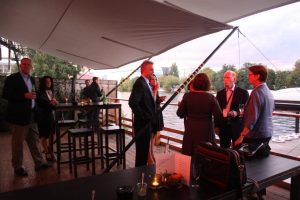 On the terrace of Spindler & Klatt.

At the Munich Re evening the choir hoisted spirits with well rehearsed offerings – not all of them shanties. The ditties included I am Sailing, What Shall we do with a Drunken Sailor, and Yellow Submarine.

Shanty-Chor Berlin is a registered non-profit association. It is a member of the Berlin Choir Association, and of the International Shanty and Seasong Association, which is based in Delzijl, in the north of the Netherlands, and has adherents in 14 European countries.

The Berlin venture dates from 1985, when it was set up by the former head of the Berlin Water Police, Heinz-Ulrich Lemke, and a dozen of his friends. Since then its membership has multiplied more than fourfold. It has entertained at home and abroad in commercial events (including the Baltic Sea Shanty Festival, the International Boat Show Berlin and other maritime events), and charity performances, and been recorded on CD. 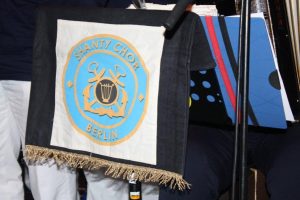 Lauded as “our pilot through all shallows, ” choir director Volker Groeling has been conductor since 2006.

Fair stands the wind as much on land as at sea these days for the shanty tradition, with many choirs, some with only a tenuous maritime link, flourishing worldwide.

Sea shanties date from the age of sail, from the 15th century or earlier. They were especially popular in the 19th century when the bigger trading ships necessitated large complements to fulfil demanding tasks. 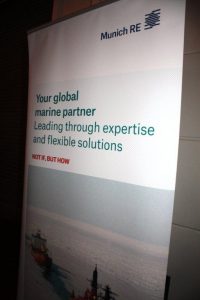 A welcome from Munich Re.

The chanting helped exert muscle for hard, repetitive work, such as hauling at the capstan. The rhythm encouraged teamwork and comradeship, and on long voyages relieved some of the boredom. Some shanties were fitted to specific tasks such as tightening the ropes. Among the most glorious are call-and-response songs with a solo voice ringing out a challenge and the chorus of seafarers booming the response. Besides the work ethic, many songs were belted out in off-duty hours purely for fun.

Einige Shantys erklangen zu genau bestimmten Arbeitsvorgängen: Das Short-Haul-Shanty erklang zum Straffen eines Taues in kurzen kräftigen Zügen.The venue for Munich Re’s hospitality, Spindler & Klatt, is a former Prussian army bakery amid converted warehouses in the so-called Bohemian quarter Kreuzberg. Frankie Spindler and Klatt Jesko run a trendy establishment that has attracted its share of celebrities. As they sipped drinks on the restaurant’s open wooden terrace, guests could see across the River Spree a long stretch of the Berlin Wall which divided the city for 28 years. Some 1, 316 m of the former Wall is now sprayed with colourful graffiti and called the East Side Gallery. The city’s publicity people call it “the world’s longest permanent open air exhibition” as it is made up of murals by 118 artists from 21 countries. 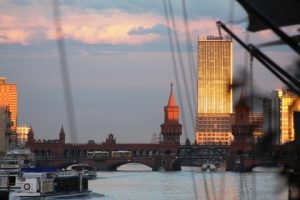 Sunset over the Oberbaumbrücke.

The Munich Re party witnessed the sun setting dramatically behind the Oberbaumbrücke, the distinctive double-deck bridge over the Spree.

The seven-arched bridge stands out because of its brickwork and mock medieval turrets.  It carries motor traffic on the lower deck and U-Bahn trains on the upper level. Built in 1895 on the site of a 1724 timber bridge, it became one of the symbols of the Cold War as a checkpoint for one direction only: west to east.

Rounding off the evening.

As the choir struck up, the insurance and reinsurance professionals from many countries tucked into menu items including cream of carrot soup with sesame and ginger, salads, smoked pork chop, red snapper fillet, penne rigate with Corsican-style sheep’s cheese, and banana and chocolate cake.

Shanty-Chor Berlin’s next engagements on home territory will include ‘Christmas at Sea, ’ a sold-out concert on December 5 2015, and the 19th Berlin Shanty Festival on May 28 2016.