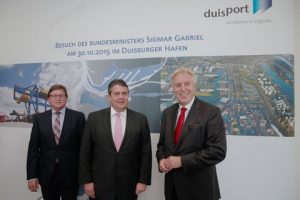 Duisburg,  30 October 2015 – Today Sigmar Gabriel, Federal Minister for Economic Affairs and Energy, learned more about the initiatives and projects undertaken by Duisburger Hafen AG. The main reason for his visit: the linkage of industry and logistics. The importance of innovative partnerships between science and business in Duisburg was also highlighted in this context. Digitalization will become the growth engine for industry and logistics across Germany, and offers considerable value potentials for the region. The Port of Duisburg is considered a national trend-setter in this area. A joint project by duisport and START Zeitarbeit NRW GmbH, which aims to facilitate the integration of refugees into the German labor market, was also presented as part of the visit.

“Last year, the World Bank designated Germany as the world champion of logistics. Highly-efficient ports such as those found here in Duisburg played a vital role in obtaining this designation. The Port of Duisburg is an important logistics hub for Germany, and secures jobs in the region, ” says Federal Minister for Economic Affairs Gabriel.

The linkage of industry and logistics was one of the main topics of discussions. The increasing trend towards digitalization and software orientation places great challenges on industry, but particularly on medium-sized companies. IT solutions will play an increasingly important role in industrial processes. The logistics industry must develop solutions that support the transformation of industry to the digital age. In this context, duisport plans to continue to expand Duisburg as a logistics location, and to connect it to the industries in the Rhine and Ruhr region.

“The degree of cross-linking in the logistics industry is already quite significant, when one considers the interfaces between producing companies and suppliers on the one side, and the customers on the other side. Duisburg’s future growth will depend on the continued promotion of the linkage between industry and logistics in combination with high-performance IT. In this vein, there should also be a focus on the promotion of young entrepreneurs, ” emphasizes Erich Staake, Chief Executive Officer of Duisburger Hafen AG.

A newly-initiated pilot project by duisport and START was also introduced during the visit by Federal Minister Sigmar Gabriel. The project “Partnerschaftliche Ausbildung für Flüchtlinge” (partnership-based training for refugees) offers targeted support for refugees and their integration into the German labor market. To this end, a total of 24 refugees will be given an opportunity to complete internships in different divisions of the duisport Group over a period of one year. START assists with the administrative management of the project, and also provides supplementary measures for personnel development purposes – including language courses. At the end of the program, participants who have proven themselves will be given an opportunity to complete a job training program. The long-term objective of this initiative is to entice other companies in the Port of Duisburg and beyond to participate in the project.

“The integration of refugees consists of several building blocks, with language certainly being the key to everything. At the same time, training and job placement are also elementary steps in this regard, ” says Wilhelm Oberste-Beulmann, Managing Director of START Zeitarbeit NRW GmbH. “duisport assumes an important role in this context by providing internships for refugees.”

“I am very pleased to expand our already existing partnership with START with this project. As a medium-sized company, we view this measure as providing a concrete contribution to the integration of refugees. We can only secure the competitiveness of North Rhine-Westphalia as an industrial and logistics location if we can offer long-term opportunities to people in the region, ” says Staake.