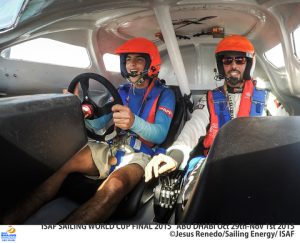 Jordi Xammar, one of the rising stars of world sailing, has set his own personal speed record on the water in Abu Dhabi, but the young Spaniard was happy to slow down dramatically on the World Cup stage today.

Xammar was thrilled to accept an invitation from Team Abu Dhabi to drive their mighty XCAT (Extreme Catamaran) on the sidelines of the 2015 ISAF Sailing World Cup Final.

Jumping into the cockpit alongside throttleman Rashed Al Tayer, he was soon up to 110kmh off Abu Dhabi Sailing and Yacht Club in the boat which could bring the 2015 XCAT World Series title to the UAE capital next month.

It was only half way to the top speed achieved by Al Tayer and his regular partner, Saleh Al Mansoori, in best race conditions, but Xammar finished the run to say,  “It was incredible – one of the most beautiful experiences of my life. 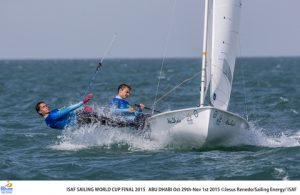 “It was amazing. Everything goes by so fast. It’s was certainly a lot faster than the speed we are used to in our boats, and I want to thank the Team Abu Dhabi guys for the experience.”

The first priority for Xammar, however, was to reach the 470 class medal race in the climax to the 2015 ISAF Sailing World Cup Final tomorrow. 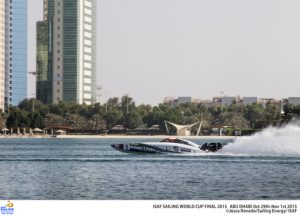 With the top ten finishers qualifying, Xammar and Spanish team-mate Joan Herp were placed 7th, and looking for a repeat of the form which gave them victory in the medal race at the recent 470 World Championships.