Ecuador promotes itself as Land of Chocolate…

Ecuador promotes itself as Land of Chocolate, as cacao becomes a hot commodity

Ecuador is making a strong bid for the title of the “fine chocolate capital of the world” – something that will be challenged by several of its international rivals, but the country has considerable history on its side.

It already claims the crown and sees it as the basis for attracting valuable tourist income.

He and his team said that Ecuadorian chocolate “is recognised as one of the best worldwide and appreciated for its surprising flavours and aromas.” Ecuador exports more than 200, 000 tonnes of cacao beans and semi-finished products each year. The country says that it produces some 63% of the ‘fine aroma’ cacao also known as ‘cacao arriba’ exported in the world. 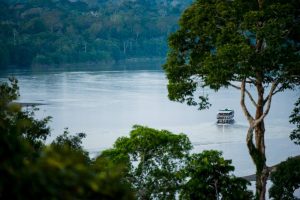 Building on a range of excursions and routes already in operation, Ecuadorean representatives had talks in London with tour companies and others, seeking to “give travellers the chance to get closer to the source of this delicacy by enjoying wonderful experiences” in the four regions of the country.

The cacao farming areas mainly involve traditional haciendas and flatlands in the Pacific coast and the Amazon regions.

Mr Hamilton said that a short drive of two hours from the largest cities, Quito and Guayaquil, takes tourists to immerse themselves in the rural way of life in plantation areas, to learn about how cacao is grown and the fermentation and drying processes. Clients could even have a hand themselves in producing chocolate. Some destinations offer spas with chocolate therapy. In Santa Rita County in Napo province, visitors are welcomed at the House of Cacao which is built from the same type of straw as the misnamed Panama hat, another product of which Ecuador is proud.

Recent archaeological evidence is said to have shown that the cacao tree probably first grew in what is now the Ecuadorian Amazon, and not in Mexico.  Some 5, 500 years ago in the western Amazon the Mayo-Chinchipe farming-based culture was, it is claimed, the first to cultivate cacao and it was offered to the gods for the wellbeing of the souls of the dead. The Palanda community is said to have prepared a cacao beverage 2, 000 years before the Aztecs cultivated chocolate.

In the 16th century, colonising Spaniards made their way from Guayaquil and the Guayas river basin to what is now the province of Los Ríos, from where cacao arriba derives.

In the late 19th century and early 20th century, Ecuador was the world’s leading producer of cacao. Today’s chocolatiers are producing more and more gourmet products that have won praise in international competitions. 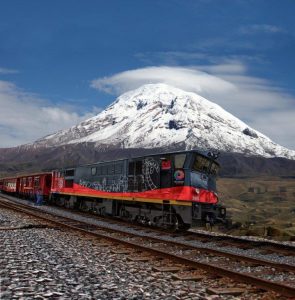 Wilderness and agri-tourism journey of Ecuador’s “train of the ice.”

A sustainability award was granted by the United Nations in 2014 to the ‘wao’ chocolate made by Waorani women of the Yasuni Biosphere Reserve in the Amazon.

Mr Hamilton emphasised the fine nature of Ecuadorean chocolate in contrast to the milk products popular in the UK.

He said that pure chocolate improves the circulation of blood to the brain, and stimulates the release of endorphins, make you feel happy … and are very good for sex life.

At the Universidad de San Francisco de Quito, where he teaches, the French chef Cyril Prudhomme has set up the Chocolate Academy to promote research and confectionery innovation. Another specialist designs edible ladies’ shoes with chocolate high heels.

The Universidad de las Americas and the brand Republica del Cacao organised a competition for students from whom Daniela Sarmiento emerged as 2015 Young Chocolatier for her cake recipe which involved peppery sugar dough, curry cream, brownie dough and fresh raspberries.

As most cacao production has been exported, Ecuadorians have been missing out on some of these treats, having been encouraged to drink relatively bland soluble cacao mixes.

Ecuador has a useful basis for its industry to win new overseas custom – more than 25 brands of chocolate are exported to 30 countries.

The deputy minister said that the aim was “to link the country with a gourmet product that has already obtained international recognition, thereby creating a connection between the consumer and the tourist.”