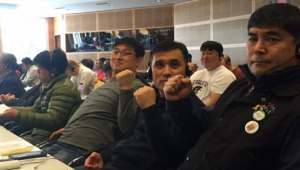 Over 100 global delivery workers and union activists meeting in Nyon, Switzerland have united to condemn a knife attack on a DHL courier in India and union repression in Korea.

06/11/2015 – Last week, Sunil Pilani, 36, was stabbed several times on his way from work to his temporary home in Chandigarh. He had been transferred over 165km from his family in New Delhi to Chandigarh after becoming a union activist at the DHL Rama Road Service Centre.

Sangam Tripathy, ITF Asia Pacific assistant regional secretary, criticised DHL for transferring Pilani: “We are outraged. We want better protection for those union activists like Sunil that have been transferred by DHL. Workers have a right to organise and return safety to their families at the end of each day.”

The early morning 200-strong police raid on the offices of the Korean Federation of Public Services and Transportation Workers’ Unions (KPTU) was described by Wol-San Liem, KPTU international officer, as another crack down on the Korean labour movement. She added that drivers are fighting for decent work, health care and dignity: “The repression will get worse, we will need your international solidarity very soon and will be calling on your support.”

Workers and activists in the global delivery sector pledged their full support for Sunil and the KPTU, and offered to stand with them in international solidarity. They were meeting at UNI Global Union, from 3-6 November, to develop strategies to fight for better rights for workers in global delivery, with groups representing workers at DHL, FEDEX, TNT, UPS, GEOPOST and Japan Post-Toll group.

As part of the DHL group, workers and organisers from Kenya, Korea, Bermuda, Colombia and the UK reported on their organising efforts at DHL, and the company’s attempts to stop them.

Watch Tom Peeters, of the BTB, Belgium, talk about how conditions for all at DHL have improved >>

Find out more about the ITF’s work in the global delivery industry here.