Graduation ceremony at the University of Strathclyde 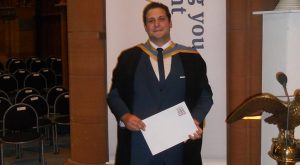 Last evening, in a wonderful ceremony that took place in Glasgow, the University of Strathclyde hosted the Engineering Department graduation ceremony.

Despite the weather, graduates from more than 100 countries, along with their families gathered in the Barony Hall for the ceremony. The enthusiasm of the graduates was obvious, as the ultimate recognition of the hard work they had put in during the previous year had finally arrived.

A great honour for the whole academic body present at the Barony Hall was the presence of Sir Chris Snowden, Vice Chancellor of the University of Southampton. Sir Chris, well known for his major breakthroughs in microwave technology, was acclaimed for his contribution to engineering science with the degree of Doctor of Science honoris causa.

The ceremony ended, as it should, with the stirring sound of bagpipes, lending the appropriate Scottish tone to the celebration.

Among those graduating was our supporter and contributor Dimitrios P Evgenidis, who obtained his Master’s degree in Marine Engineering. The most recent article by Dimitrios here in AllAboutShipping was “Investigation on the power efficiency of the Carangiform and Anguilliform LOCOmotion of an articulated robotic fish.”  We wish him every success in his business career!