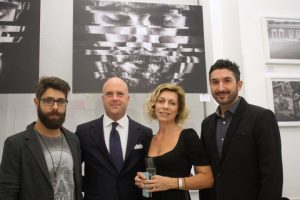 Link to Life: exhibition organised at the Italian Consulate in London by Carola Syz Projects of photographs by Pasquale Ferraro and Renato Pinna

Record numbers of Italians are seeking a better life and rewarding career in the UK, an influx that has been overshadowed by the more dramatic European immigration stories of the last couple of years. Italy – while wrestling with the problem of thousands of seaborne refugees making landfall on its shores – has become a country of emigration. 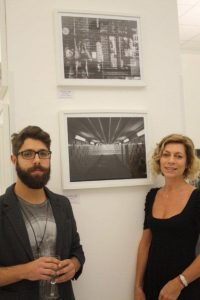 This little-chronicled trend is the half-spoken background to a new exhibition at the Italian Consulate in London by two Italian photographer-artists who, like many others, left their home in pursuit of new horizons.

Carola Syz Projects has brought together Renato Pinna and Pasquale Ferraro for an intriguing joint show. Renato was born in Sassari, the second largest city of Sardinia, and Pasquale is from Cremano, on the Bay of Naples, and they share in their different and intriguing approaches an emotional Link to Life, as the show is titled.

Renato’s black and white shots filter unpretentious urban landscapes in parts of London including the East End and Islington, and he presents a series directly about young Italians who make their way to London to follow their dream, only to come up against the often tough reality of life in the capital.

Pasquale is engaged too by the intensity of city life, by its shadowy, dominant architecture and by distant glimpses of strolling lovers. 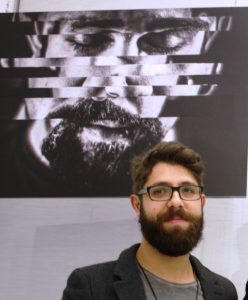 Making their way in Albion’s teeming metropolis, the artists could hardly have asked for a better platform to showcase their work, so it was appropriate that at the private view evening, both men warmly expressed thanks to Italy’s Consul General in London, Massimiliano Mazzanti, for making space available in the consulate, which moved into its present Farringdon Street premises two years previously; and to curator and organiser Carola for giving them such a great opportunity.

Consul General Mazzanti is conscious of the responsibility that the demographic developments have placed on the shoulders of Italian diplomats.

He has said that he wants the consulate to be considered “the home of Italians abroad, ” and after congratulating the two photographer-artists he went on to enumerate the growing presence on British soil of his compatriots.

Underlining how the UK has become a magnet for Italians (having recently overtaken Germany in popularity), the Consul General said there were estimated to be 600, 000 Italians living in the country, with 2, 000 further registrations every month. About one third of the Italian Diaspora is calculated to be living in the capital. 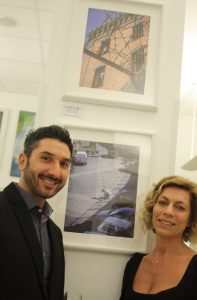 The Consulate General of Italy in London is first in Europe (and the second in the world) for the number of Italian people in its remit and for births registered. Fondazione Migrantes, a Roman Catholic organisation that monitors migration, says that the number of Italians making their way to the UK has risen by 71% in a year.

In the 12 months to March 2015, Italians were the third largest group to enter the UK for work, after people from Romania and Poland, according to Britain’s Office of National Statistics. More than a third of them were men and women aged 18 to 34, frustrated by the high unemployment rate. Half of all young Italians cannot find work.

Welcoming the guests, Carola Syz pointed to the different styles of the two artists: that of Pasquale very romantic and passionate, and that of Renato making reference to the realities of life in London. “I wanted to pair them to show the contrast in their work, ” said Carola Syz.

Carola is a tireless promoter and presenter of emerging artists from her native country of Italy and from several other nations, and she is herself a distinguished photographer. 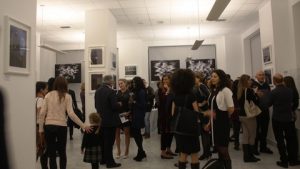 Guests at the private view.

Renato’s photographic project Dissatisfaction Wall – Giovani Italiani is a somewhat disturbing series of images of Italian men of 18-25 years old beginning to look old before their time with their unease betrayed by their closed eyes. Their prospects seem dark and indecisive, for they have already lost faith in one country and now perhaps in another.

The discomfort, says Renato, is like the thread of Ariadne uniting the portraits –a link the viewer might hope will help the subjects find their way out of the labyrinth.

From an early age Renato was keenly interested in all forms of art, especially in music and the visual arts, and in 2005 founded the ‘metal’ band Souls of Diotima (named after the priestess who is supposed to have taught Plato the philosophy of love). In the band Renato played ‘bass and growl vocals, ’ he composed lyrics, and the group embarked on recordings.
He approached the world of photography in 2009, buying his first camera and working as assistant to the photographer-artist Gianluca Vassallo, after which he studied graphics and design at the Academy of Fine Arts in Sassari. 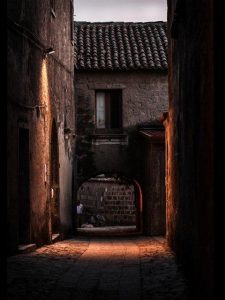 One of Pasquale Ferraro’s urban images.

He took part in four exhibitions in Sardinia; then in February 2014 in Photography Now at Brick Lane Gallery, London; and in May 2015 put on the exhibition Islands, at Press Room Coffee Shop, Kingston-on-Thames. Renato intends to continue to concentrate his lens on London – as opposed to any other city – so that he can mine its limitless subject matter.

Pasquale is self-taught as a photographer, and prefers to describe himself as “an observer.” He “analyses the opposite planes of reality and lingers on urban aspects, both architectural and human, trying to go beyond appearances.”

The duo agreed during conversation on the evening: “We compose our photographs from the heart, not with the camera.” There is much more to producing memorable work than technical accomplishment, they made clear, much as they treasure the capability of their equipment – both favour Canon cameras.

The Consul General has had a varied career, starting with four years as an officer of the Italian Navy on its flagship, the Fincantieri-built aircraft carrier Giuseppe Garibaldi, with home port La Spezia, on Mediterranean duties. Among diplomatic assignments, he has served at the Italian Embassy in Riyadh, Saudi Arabia; was appointed to the delegation of the Italian presidency of the EU Council; was head of secretariat at the Italian foreign ministry; was commercial counsellor at the Italian embassy in Washington DC; director and director for the Americas, Asia and Africa in the office of the diplomatic adviser to the Prime Minister.

For services rendered during the Italian presidency of the EU Council, he was made Knight of the Order of Merit of the Italian Republic. He was appointed Consul General in London in August 2013.

Giovanni and Riccardo from Gola Restaurant in Chelsea served cocktails and canapés.

Link to Life. Photographic exhibition by Pasquale Ferraro and Renato Pinna, under the auspices of Carola Syz Projects, is at the Italian Consulate, Farringdon Street, London, until January 27 2016. Viewing by appointment only.