A generous taste of Portugal… 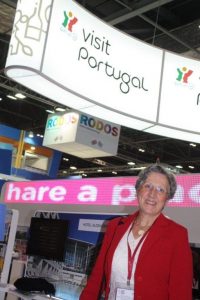 A generous taste of Portugal during the World Travel Market

My beloved Portugal – my birthplace – put on one of the largest displays at the 2015 World Travel Market in London, the spectacular show for the wholesale travel trade.

You could hardly miss the presence of Portugal, even in the vast ExCel exhibition centre – there were a total of 41 exhibitors from the country representing the capital, the regions, hotels, car hire and much else.

Even before one reached the stands, people were handing out copies of ABTA Magazine Daily featuring Lisbon’s antique trams on the cover of its first WTM 2015 issue, and among features inside the publication was one purporting to describe the best of Portuguese cuisine, although in my opinion the writer underestimated the variety and quality of today’s restaurants, especially those specialising in the wonderful seafood. At least the journalist concerned stopped far short of the description – which met with a strong backlash – in a Times column of the cuisine as the worst on earth. The review by Giles Coren in turn was panned by among others MasterChef Portugal judge Miguel Rocha Vieira, who said that the Portuguese people were above all proud of “our sea and the food we make.” 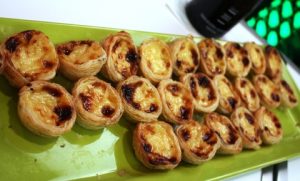 Visitors to the pop-up Portugal bar at the World Travel Market could make their own judgment, for featuring on the menu as much as our renowned wines, was… food. A Taste of Portugal session each day attracted many visitors, and on the Tuesday evening, the national airline TAP Air Portugal showcased its onboard wines.

Everyone had a chance to enjoy ham from Alentejo, cheese from Serra da Estrela, and (my favourites) scrumptious pastéis de nata. The pastel de nata, baked from egg yolk sprinkled with cinnamon, has become an international favourite – in September 2014 I sampled the Hong Kong and Macau versions, where they are called egg custard tarts. You can buy some good pastéis in Portuguese shops in London, but you cannot beat the luxury of tasting one just out of the oven in a pastelaria (pastry shop) on the peninsula.

Aljustrel, my hometown in the Alentejo. Photo by Francisco Colaço.

While we snacked at WTM on these delicacies, we sipped two fine ruby coloured wines from Alentejo. One rejoiced in the title of Herdade das Valadas Reserve L’And Vineyards Montemor-o-Novo. This comes from L’And Vineyards Resort which is “an exclusive country club set among vineyards, with views of the lake and the medieval castle, Montemor.” The second was Monte do Vau Riso Reserva Sousa Otto & Friends, from Beja.

I rather liked the slogan of one of the visitportugal.com brochures: Portugal, A place you know, a thousand you don’t. It was thus interesting to see my province, Alentejo, promoting itself in many ways, including as “a family holiday.”

In my younger days, the family used to pack their bags including pots and cutlery and even woollen mattresses, to take the ‘camionete’ – the bus – for what were then small resorts on the Algarve.

These days, Alentejo makes its own bid to welcome tourists from home and abroad. The 3, 000 hours of sunshine every year certainly helps in that regard. Alentejo was touted too as a “romantic destination” with stays for couples in montes (farm estates), village cottages, rented houseboats on the Alqueva reservoir, and in boutique hotels. On the long Alentejo coastline, “you have to try the fish stews made with skate, monkfish, eel and conger eel, dogfish or mussels, ” urges the tourist literature.

Now, supplementing its many beach-based offerings, the Algarve is going in for rural tourism, too!

Lisbon and Oporto continue to polish their credentials as destinations for city breaks, and there was a surprise from the north of Portugal: the region has joined the many parts of the world (including Mexico, Ecuador, Ghana, Indonesia, Belgium and Switzerland) in offering chocolate-flavoured holidays.

Fábrica do Chocolate is a hotel, restaurant and museum in Viana do Castelo, a resort on the Costa Verde and one of the ports from which the Portuguese ‘Discoverers’ set out. The Fábrica boasts chocotherapy treatment, a private chocolate fountain for two, and chocolate tastings to round off a visit to the museum. The museum has five sections: the origins, where visitors see and touch replicas of cacao trees and pods, and dried cocoa beans; Xocolatl, a 3D projection about the way cacao was used by the Olmecs, Aztecs and Mayas and how the Spanish ‘discovered’ it and brought it to Europe; Mundi, a circular room representing the dissemination of chocolate throughout the world; Cult, a room where visitors can learn how chocolate became an element of inspiration and devotion;  and Factory, where visitors can take part in the production of a chocolate bar.

Why is chocolate a speciality of the town? It has one of Portugal’s oldest chocolate factories, set up by a local businessman, José Lima, in 1914. It moved in 1922 into a modernist building, ceasing its original function in 2004, and was renovated into the current tourist complex. Chocolate manufacture moved to new premises in Barcelos, a town best known for the Galo de Barcelos – a multi-coloured cockerel which is an emblem of Portugal.

For travel trade people who want to follow up the Portugal angle, there will be the BTL (Bolsa de Turismo de Lisboa) International Tourism Exhibition in Lisbon from March 2-6 2016.