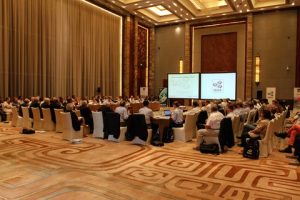 A two day meeting of the ISAF Council followed by the Annual General Meeting drew the 2015 Annual Conference to a close in Sanya, China.

More than 500 delegates met on the Chinese island of Hainan from 7 – 14 November to make the decisions that will shape the future of sailing into the new year. The meeting of ISAF Council, the final decision making body of ISAF, voted on the recommendations made by the ISAF committees throughout the week.

ISAF President Carlo Croce delivered his report to ISAF Council on 13 November touching on the spirit within the current ISAF Executive Committee as well as the goals of the federation. The report is available to view on the ISAF website here – http://www.sailing.org/news/41430.php

Nazli Imre gave an overview of the activity within training and development at ISAF. The 2015 Emerging Nations Program was reviewed and was viewed as success with five continental clinics bringing in 105 sailors and 48 coaches from 38 nations. As a result of spreading the sport, the 2015 Youth Worlds is set to be a record breaker. Sailors from 80 nations will head to Langkawi this December, smashing the previous record of 67 nations.

ISAF Vice President Gary Jobson gave an overview of the Committees he covers such as Racing Rules and the Oceanic and Offshore Committee as well as giving an update on the Marketing and Media activities. Jobson also spoke about the Live TV at the World Cup events throughout 2015 and outlined the plans to push ahead for further live coverage in 2016 building up to the Rio 2016 Olympic Games.

Chris Atkins has been working closely with ISAF’s Race Officials, most notably those who were at the Aquece Rio – International Sailing Regatta where he was able to see first-hand the expectations and pressures the Race Officials were on. Atkins praised them for their decisions and their continued diligence and excellence. Atkins also touched upon the upcoming African qualification regatta for the Rio 2016 Olympic Sailing Competition. Algeria will hold the first qualifier in the Laser, Laser Radial and RS:X and will feature sailors from 10 nations gunning for a single spot. 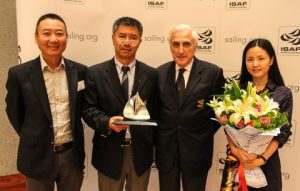 Quanhai Li spoke about the success of Sailing World Cup Qingdao which acted as a Rio 2016 Olympic qualifier in the Men’s and Women’s 470, Finn and Nacra 17. Li mentioned that there were 200 volunteers and 120 media in attendance.

Scott Perry has been looking after Para World Sailing and mentioned that the upcoming 2015 Para World Sailing Championships in Melbourne, Australia will welcome a total of 31 nations to the event with a possibility of 2 -3 further countries.

Adrienne Greenwood gave an update on the 2015 ISAF Youth Match Racing World Championship in Swinoujscie, Poland. Sam Gilmour (AUS) overcame Joachim Aschenbrenner (DEN) in what was a reversal of the result from the inaugural World Championship in Helsinki, Finland in 2014. The event continues to grow with bids to be received for the 2017 edition early next year.

The Montserrat Yachting Association resigned as an ISAF associate member.

A new structure of the ISAF Committees commencing in 2017 was approved.

The Windsurfing and Kiteboarding Committee and the Empirical Handicap Sub-committee were discontinued.

Equipment and Racing Rules of Sailing

A large number of submissions were received in advance of the Annual Conference and the expert committees made their recommendations to ISAF Council. Several of the recommendations were approved and now the hard work begins for the changes to be implemented in time for the publication of the rules books in 2016.

Fox spoke about the competition schedule, race officials, pollution concerns and lessons learnt from the test event in August. Boddener gave an update on the Marina da Gloria that is recently undergoing renovations. The handover is expected in April 2016 and ready for competition. Flamengo Park, adjacent to Marina da Gloria will also make up part of the venue.

The Nacra 15 was selected as the ISAF Youth Sailing World Championships multihull for the 2016 event and onwards. It was also confirmed that the five events for the Buenos Aires 2018 Youth Olympic Games will be the Boy’s and Girl’s Windsurfing, Boy’s and Girl’s Kiteboarding and a Mixed Multihull event. The Techno 293+ was confirmed as the windsurfing equipment and the Nacra 15 for the Mixed Multihull. The Kiteboarding equipment is to be confirmed.

Class applications came from Kiteboards, Dinghies, Foiling Catamarans and Around the World Race yachts. The RS Aero, Far East 28R, Volvo 65, IKA Twin Tip Freestyle, IKA Kite Foil and Nacra F20 Carbon were approved by ISAF Council and will now be subject to signing a contract. The M32 Class application was deferred to the 2016 Mid-Year Meeting.

The next ISAF meeting will be the Mid-Year Meeting in Milan, Italy next May with the 2016 Annual Conference taking place in a European destination to be confirmed from 5 – 13 November 2016.

Full details of all the decisions made at the Annual Conference will be available on the ISAF website herewww.sailing.org/meetings in the next few weeks.