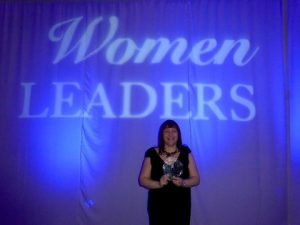 Held on Friday 20th November at the Doubletree Hilton, located at Stadium:MK, the Milton Keynes Women Leaders Awards ceremony brought together almost 450 business and community leaders to recognise outstanding women in Milton Keynes and celebrate the valuable contribution women make to the workplace and education.

Organised by Jan Flawn CBE, a previous winner of the First Woman of Business Services Award 2013, the awards recognised the most outstanding businesswomen working within Milton Keynes who have contributed to the growth of their sector, and the continued success of Milton Keynes.

Jean was selected out of five shortlisted finalists for the Female Entrepreneur award by the judges due to her passion in business and significant contribution to the Milton Keynes community. “Jean clearly demonstrated and evidenced a genuine passion and commitment to the Milton Keynes business community.  She has created two new successful and value driven businesses whilst facing specific personal and professional challenges. Jean is recognised as an international leader in the maritime industry and is recognised in each strand of her business. Against this backcloth she has developed a significant role in promoting Milton Keynes and community engagement. The judges were particularly impressed with her passion to drive her skills in her business.”

Upon receiving her award Jean said: “I am thrilled and honoured to receive this award, recognising my business journey since launching Jeanius. Not only has Jeanius become a highly regarded global PR company, just as importantly, Milton Keynes has remained at its very heart.  In addition to Jeanius, my Non-Exec roles within MK, SEMLEP and the global maritime industry have meant I’ve been able to not only promote our great city but also engage in wider activities such as skills and education, maritime awareness and human rights. I’m incredibly lucky to love what I do – working with such lovely clients and of course, such a highly skilled team.”

Jean, along with other award winners from the night, will be put forward for the 2016 First Women Awards in London  – a premium award programme which focuses on senior-level business women and professionals.