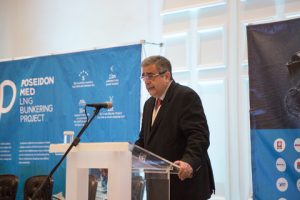 The roll out of the Poseidon Med project signifies developments in three axes: sustainability for short sea and coastal shipping, revival of the shipbuilding and manufacturing sector and development of small scale LNG supply.

As getting closer to the completion of the project in the end of 2015 Poseidon Med partners held on Thursday 19 November the Poseidon Med Stakeholders Conference at Zappeion in Athens. The conference gathered over 200 attendees representing Government bodies, Foreign Embassies in Athens, banks and Shipping funds as well as members of the Shipping and Energy Community and Port Authorities.

Scope of the conference was to provide an update on the technical and financial aspects of the project and raise discussion among Shipping and Energy Industry stakeholders regarding the infrastructure development in the Mediterranean area so that LNG can be embraced as the marine fuel of the future making thus shipping more efficient and sustainable.

Opened and chaired by Jose Anselmo, Principal Administrator Motorways of the Sea (MoS), the event featured some 18 presentations in all. The welcome addresses and keynote speeches morning sessions ensured the acknowledgement that LNG as fuel is of primordial importance for the sustainable future of Shipping.

Alecos Michaelides, Permanent Secretary General, Ministry of Transport, Communications and Works of Cyprus, underlined the potential of LNG in the Eastern Mediterranean Area and the momentum of Cypriot EEZ exploitation, whereas George Polychroniou, Head, Strategy & Corporate Development of Public Gas Corporation S.A. (DEPA) addressed on the challenges of the project and announced the second phase of Poseidon Med (Poseidon Med II) up to 2020 led by DEPA.

The core conference consisted of two sessions followed by panel discussion; the first session targeted the Financial and Logistics aspects of the project and the second one the Technical Aspects as well as the Societal Benefits from the project.

“We [Brussels] are ready to put money in the pockets of those who dare”, that was the unequivocal message of Jose Anselmo to the audience during his presentation in the Technical & Logistics Aspects Session. “Brussels likes to help those that help themselves” he emphasised pointing out that actions relevant to Poseidon Med could reach funding of up to 85% in Greece. 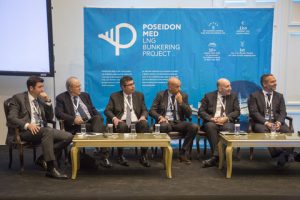 A fruitful discussion followed with the panel members who shared their concerns on the adoption of LNG from a financing perspective.  The CEO of Attica Group Spyros Paschalis stated that “Gas only Ship is a big bet” while at the same time Nikolaos Paterakis, COO Neptune Lines Shipping and Managing Enterprises S.A. underlined the need for flexibility from the Owners’ perspective. Representing the banking community Dimitris Anagnostopoulos, Member of the Board of Directors, Aegean Baltic Bank highlighted the need for incentives to be offered to the frontrunners.

In the Technical Session chaired by Thanos Koliopulos, Lloyd’s Register Global Special Projects Manager, emphasis was given to the Safety aspects of the adoption of LNG as marine fuel. “Risk assessment methodology and tools applied leave no doubt that there are high safety standards across the LNG supply chain, from LNG transportation and bunkering to LNG fuelled ships operation”, said Thanos Koliopulos.

Through the roll-out of the Poseidon Med project and the conclusions derived from the conference at Zappeion it becomes evident that the main development plans promoted are financing schemes and incentives to allow the sustainable future of Short Sea Shipping and the development of small scale LNG supply, but also the revival of the ship-building and manufacturing sectors in Greece as well as in Europe.

Viewers can log on the link here and read the previous event which took place in Cyprus in early September 2015.

POSEIDON MED is the first Cross European Border project which aims to introduce LNG as the main fuel for the shipping industry and develop a sufficient infrastructure network of bunkering value chain. It focuses in the eastern Mediterranean region with five Member States (Cyprus, Greece, Italy, Croatia and Slovenia) involved.

POSEIDON MED as a Global Project aims at stirring the shipping waters in Greece and has been received enthusiastically by the shipping community, the local society, as well as the political administration.

POSEIDON MED project is co-financed by the European Union.