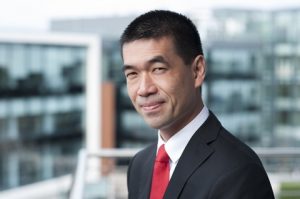 SINGAPORE – NOVEMBER 25, 2015– Ardmore Shipping Corporation has opened a new office in Singapore, with Celio Wakamatsu joining the Ardmore team as Chartering Manager and Retno Muninggar as Voyage Manager. The new Singapore office will allow Ardmore to expand its Asian and Middle Eastern operations in these important growing markets.

Wakamatsu joins Ardmore from Petrobras’ Singapore office, where he has been working for two years, following his work with the company in Houston and Brazil. He brings with him thirteen years of chartering experience across all tanker sizes and cargo types and holds a degree in Civil Engineering, a Masters Degree in Logistics and is finalizing an MBA in Shipping and Logistics. Muninggar has 12 years of experience working for tanker and chemical companies in Asia, most recently for Vitol and Navig8 Chemicals. She also has a BSc in Chemical Engineering.

“Singapore has become a very important, influential and independent chartering market and the opening of our Singapore office will allow Ardmore Shipping to build closer relationships with customers in the tanker sector in Asia and the Middle East. Having an office in Singapore enables us to transact business and provide operational support in close proximity to our customers and on their time zone, thereby enabling Ardmore to further improve an already very effective service platform and in return increase deal flow to the company”.

Ardmore’s global growth has been driven by the recent upturn in the product tanker market and follows Ardmore’s strong commercial performance and fleet growth having grown from eight to twenty-four vessels on the water in the last two years, including the delivery of its latest two newbuilding tankers, the Ardmore Seahawk and Ardmore Chippewathis month.

“A great deal of cargo is controlled from Singapore, and we already have a lot of important relationships in this market which we are keen to evolve. We are aiming for our chartering platform to take on a stronger regional profile and this will enable us to take our commercial presence in Asia to the next level. It has always been an important charter market for Ardmore, and our new office will allow us to strengthen our existing relationships and to develop a more regionally-focused commercial strategy.”