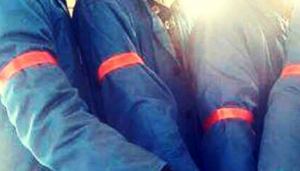 The ITF has urged the Senegalese president to act over punitive actions taken against aviation workers and their union, following a plea for help from its affiliate, the Syndicat Unique des Travailleurs des Transports Aériens et Activités Annexes du Sénégal (SUTTAAAS).

26/11/2015 – The union had told the federation that a large number of employees had worn red armbands to protest against being charged interest on a loan which is usually issued interest-free to workers during Islamic holidays in Senegal. Managers at Aviation Handling Services (AHS) reacted with forced transfers, confiscation of airport access badges, and dismissals of some workers and shop stewards. SUTTAAAS was also blocked from collecting union dues.

AHS has refused to lift the disciplinary actions, despite mediation by the ministry of tourism and air transport and a formal notice served by the regional inspectorate of labour and social security of Dakar that it does so. The company’s actions contravene the national inter-professional collective agreement of Senegal (NACI) as well as ILO conventions 87 and 98, which Senegal has ratified.

In his letter to president Macky Sall on 25 November, ITF general secretary Steve Cotton said: “The ITF and its affiliates worldwide are supporting SUTTAAAS, because all workers in the country have the right to peacefully express their displeasure, while abiding by national laws and regulations.

“We urge you to ask the management of AHS to comply with the formal notice of 13 November 2015, of the regional inspectorate of labour and social security of Dakar, by unconditionally ceasing all punitive sanctions, to allow social dialogue to prevail within the company.”

Keep up with the latest news at the ITF aviation blog.