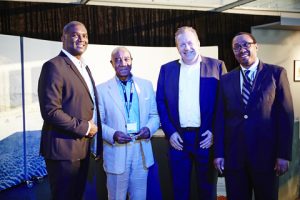 Damen Shipyards Cape Town (DSCT) is honoured to have played a role in the success of the recent Netherlands Trade Delegation to South Africa. The visit was led by the Netherlands Prime Minister H. E.  Mark Rutte, Vice Prime Minster Mark Frequin and Agriculture Minister Martijn van Dam, together with 65 Dutch companies. It was the biggest trade delegation to the democratic South Africa in the history of the Dutch/South Africa relationship.

Lunch with the President

Sam Montsi, Chairman of DSCT, played an active part in proceedings, attending high level meetings and events, and welcoming senior delegates to the DSCT yard. Mr. Montsi also participated in meetings held in Johannesburg and Cape Town to discuss the economy and business environment and attended the highlight of the tour: a lunch hosted by the President of South Africa, H. E. Jacob Zuma, at the Sefako Makgatho Presidential guest house at the Union Building in Pretoria. As well as the President, the Prime Minister and the delegation, a number of senior ministers and leading business persons in South Africa also attended the lunch and a private round table meeting. At that meeting DSCT was one of a select group of companies invited to give presentations to the ministerial group, who in turn offered suggestions on how the issues raised might be approached. 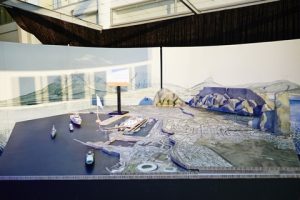 Garden of the Future

Garden of the Future

On 18 November 2015, DSCT was one of 80 companies represented at the official opening of the Garden of the Future by Mr. Mark Frequin, Dutch Vice Minister for Transport and Mobility. An interactive exhibition, the garden uses scale models to show a variety of built-up landscapes each representing different economic sectors of South Africa and telling the story of the successful Dutch–South African partnerships that exist in the Cape provinces. DSCT was there representing the national shipbuilding and maritime economic sector.

The following day, DSCT was visited by over 65 Dutch delegates and South African political and business figures. As part of the day, DSCT hosted meetings discussing infrastructure & logistics that included presentations by both Dutch and South African companies.

Mr Montsi commented, “It was a great honour to be closely involved in this top level trade delegation. As a South African yard with significant shareholding by a Dutch group we could offer a dual perspective on the strengths and potential of each nation and, we hope, the visit by many delegates to the yard demonstrated the benefits that can result when both countries’ business entities work together.”

Damen Shipyards Group operates 32 shipbuilding and repair yards, employing 9, 000 people worldwide. Damen has delivered more than 5, 000 vessels in more than 100 countries and delivers some 160 vessels annually to customers worldwide. Based on its unique, standardised ship-design concept Damen is able to guarantee consistent quality.