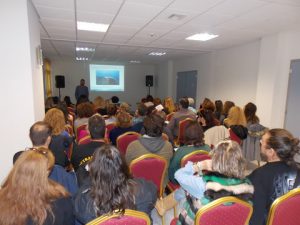 With the “Train-the-Trainer” seminar for teachers titled “The Marine Environment and us: Ensuring a Sustainable Future”, HELMEPA’s “Educational Community and Public Awareness Campaign on the Marine Environment, Shipping and Sciences” was concluded in the Region of Corinth. The Campaign, which is being implemented across 14 Greek cities until 2017 is supported by UK independent charity, Lloyd’s Register Foundation* (the Foundation).

The seminar was organized in cooperation with the Directorates for Elementary and Secondary Education of Corinth at the Alexandrion Conference Center of Loutraki and was attended by 50 teachers. Presented topics included the marine environment, shipping, climate change and marine litter. Discussion on the latter was enriched with the experience of representatives from the local volunteers’ team “Loutraki Divers” and the Loutraki Diving Club, who presented a brief exhibit of typical litter items they have collected from the local seabed.

Participants received a Certificate of Attendance along with supporting educational material and became members of the “Marine Teachers” network of HELMEPA, through which they will be continuously updated on the Campaign’s themes and will be able to share ideas on innovative educational activities. 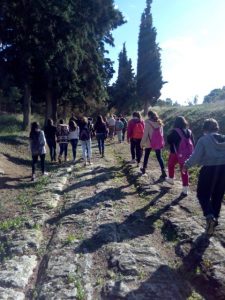 The Campaign’s environmental Exhibition operated under the auspices of the local Municipalities for a total of 25 days at the Municipal Theater of Corinth and the Alexandrion Conference Center of Loutraki. During these days it was visited by approximately 1, 600 schoolchildren and 90 teachers from 15 Elementary and High Schools of the wider region, who were transported to the Exhibition on the Campaign’s expenses.

Besides raising awareness among the school and educational communities on the themes of the Campaign, the aim of this HELMEPA–LRF initiative is to inspire youth in Greece to get involved in science and engineering. Thus, an educational visit of students from the Perachora High School to the Army’s School of Engineering in Loutraki was organized. There students and accompanying teachers were informed by experts on the Ancient Diolkos, a paved roadway constructed between the 7th and 6th Century B.C. for the transportation of merchant ships from the Corinth Gulf to the Saronic Gulf and vice versa. The Ancient Diolkos, a segment of which exists in the School’s grounds, constituted a forerunner of the Corinth Canal and is considered one of the most important engineering achievements of Ancient Greece.

HELMEPA wishes to thank the Municipalities of Corinth and Loutraki-Perachora-Agioi Theodoroi for placing under their auspices the Campaign, the Directorates for Elementary and Secondary Education of Corinth for the their cooperation in the scheduling of school visits to the Exhibition and the seminar, as well as all the schoolchildren, teachers and local clubs of Corinth, who through their warm response sent an optimistic message for the region’s future.

Lloyd’s Register Foundation (the Foundation) helps to protect life and property by supporting engineering-related education, public engagement and the application of research.