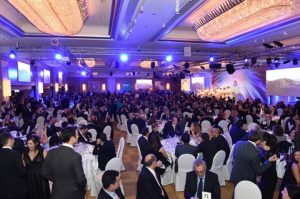 Logothetis, Alafouzos and Tsakos win major awards  as more than 1, 100 turn out for shipping awards gala
– Onassis, Neptune Lines, Eurobank and the Hellenic Coast Guard among those honoured –

A RECORD attendance and a host of celebrities contributed to the success of the Lloyd’s List Greek Shipping Awards for 2015, which were presented at a packed dinner event on Friday, December 4 at the Athenaeum InterContinental Hotel in Athens.

More than 1, 100 of Greece’s leading shipping personalities, executives and their guests at the gala dinner saw some of the Greek shipping industry’s best-known personalities and companies recognised. 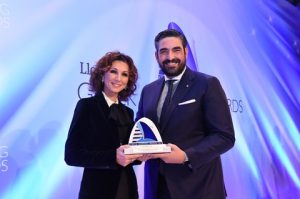 Guests enjoyed a pre-dinner cocktail reception hosted by the American Bureau of Shipping and the event was also supported by numerous Greek and international companies sponsoring individual awards.

Greece’s Olympic gold medalist and World Champion windsurfer Nikos Kaklamanakis presented a donation on behalf of the event organisers to ‘Argo’, the charity supporting children with special needs in the families of Greek seafarers. 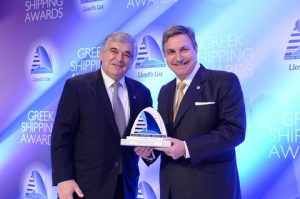 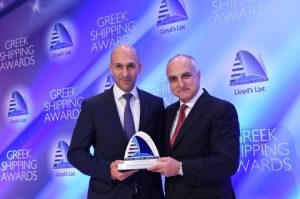 George M. Logothetis was named Greek Shipping Personality of the Year for 2015, as the judges hailed his advocacy for investment in Greece and a number of Greece-linked philanthropic initiatives undertaken by the Libra Group that he leads. The group’s shipping company Lomar Shipping, which controls more than 70 vessels, also caught the eye for its expansion this year, particularly in the container sector.

Lloyd’s List’s Greek Shipping Newsmaker of the Year Award went to Nikolas P. Tsakos, reflecting his dynamic chairmanship of Intertanko as well as the disciplined expansion of tanker company Tsakos Energy Navigation. The Award is decided by the editorial staff of Lloyd’s List. 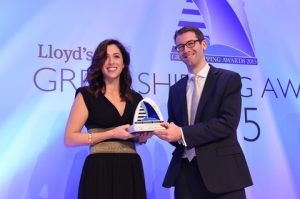 Aristidis Alafouzos was awarded the Lloyd’s List / Propeller Club Lifetime Achievement Award for an outstanding half-century career that has seen his companies Glafki (Hellas) and Kyklades Maritime order more than 100 newbuildings. Mr Alafouzos, who in recent years has been honoured by the Emperor of Japan and the government of China, is also the proprietor of respected Greek newspaper Kathimerini.

Maria Angelicoussis won the inaugural New Generation Shipping Award. A trained doctor, Ms Angelicoussis left the practice of medicine in 2009 to join the Angelicoussis Shipping Group led by father John Angelicoussis and today is responsible for all three management companies in the group – Anangel Maritime, Maran Tankers and Maran Gas. 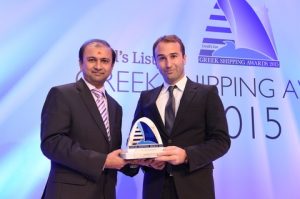 Andreas Chrysostomou was elected International Personality of the Year, the only award open exclusively to non-Greeks. Mr Chrysostomou served as chairman of the IMO’s important Marine Environment Protection Committee for a decade from 2003 to 2013. This year he was a strong candidate for Secretary-General of the IMO and was later confirmed as Director of the Cyprus Department of Merchant Shipping.

The recipient of the Dry Cargo Company of the Year Award for 2015 was Neptune Lines, which has impressively expanded its fleet with newbuilding and modern secondhand car carriers to meet the growing demands of its vehicle transportation network spanning 30 ports in the Mediterranean and Black Sea. 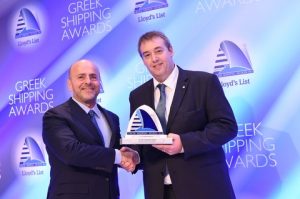 This year Neptune’s fleet, one of the 10 largest in the car carrying trades worldwide, transported more than 1m vehicles for the first time.

As Tanker Company of the Year the panel chose won of the industry’s most celebrated names – Olympic Shipping and Management, part of the Onassis Group. The company has had one of its most active years since the death of founder Aristotle Onassis, with a shrewd fleet renewal programme that has included investing in acquiring very large ore oil carriers for conversion into VLCCs. 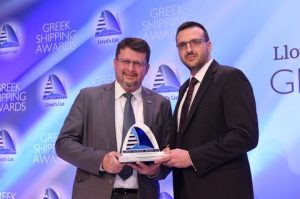 Passenger Line of the Year was Dodekanisos Seaways, honoured in its 15th anniversary year. The company operates a service providing a vital link between the Dodecanese islands that supports communities and their economies in the south-eastern Aegean that might otherwise face isolation.

Cass Technava Maritime won the Shipbroker of the Year Award, its second victory in this category, for a year that highlighted its knowledge. Always strong in newbuildingfs, the brokerage impresed the judges with its additional secondhand deals in 2015 as well as valuable activity for clients in financial sale and leaseback transactions. 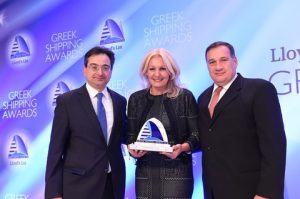 The Shipping Financier of the Year Award went to Eurobank. Despite the difficult times, the Greek bank has maintained traditional ship lending criteria, including support for medium sized companies and it has an overall portfolio of $1.3bn that includes about 65 customers. This year Eurobank has done about $200m of fresh lending.

Prisma Electronics, based in Alexandroupolis in north-east Greece, won the Technical Achievement Award for its patented LAROS remote condition monitoring system, a powerful tool to improve the vessel’s efficiency and reduce running costs. Based on wireless technology, LAROS is easy to install and cheaper than wired solutions. 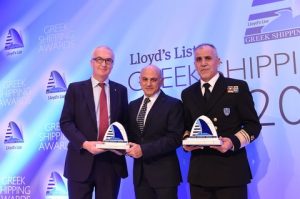 Bureau Veritas Hellas became the first classification society to win the prestigious Piraeus International Centre Award. Many shipowners offered testimony of BV’s upgraded presence in Greece, which represents 28% of the BV-classed fleet worldwide. Greece has been a big contributor to the society reaching the milestone of 100m gross tons.

The Hellenic Coast Guard and EU border agency Frontex jointly won the Award for Safety or Environmental Protection for their efforts to protect lives in the eastern Aegean as thousands of refugees attempt the dangerous crossing from Turkey to Greece. 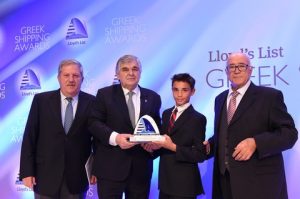 The Seafarer of the Year Award was won by Capt Dimitris Tsitsimelis. In January 2015, the Master diverted the Magna Marine bulker ‘Pansolar’ to rescue two Mexican fishermen who had been adrift for three weeks without water or provisions. Despite heavy sea conditions, the men were brought on board and taken to the nearest port, Acapulco, where they fully recovered in hospital.

The University of the Aegean was winner of the 2015 Education or Training Award. Like many public educational institutions in Greece it is facing hardship due to austerity policies but was cited for continuing to inspire students to embark on careers in shipping. 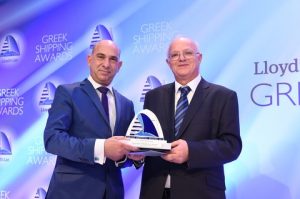 Although the Ship of the Year Award is usually made to a new ship, the panel exercised its right to recognise a vessel built in 1943. Originally named the Arthur M. Huddell it was towed to Greece in 2008 and after a major restoration project the ‘Hellas Liberty’ is now docked in Piraeus as a floating museum.

The new Lloyd’s List Intelligence Big Data Award was presented for the first time in 2015 and it went to Danaos Management Consultants and Danaos Shipping Co. for their ‘Waves’ fleet performance system that draws on multiple data sources to help streamline fleet efficiency. The award was adjudicated by Lloyd’s List Intelligence and the judges praised the variety of options available to users and Danaos’ big-picture approach. 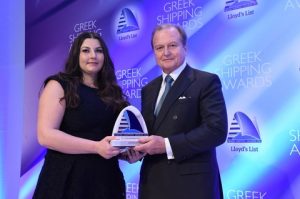 Chrysavgi Travlou Tstsimelis accepting the Seafarer of the Year Award on behalf of her husband Captain Dimitrios Tsitsimelis from George A. Tsavliris of Tsavliris Salvage Group 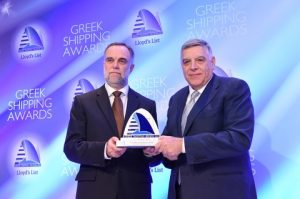 Prof. Stefanos Gritzalis, Rector of the University of Athens accepting the Award on Achievement on Education or Training from Antonis Comninos of Target Marine Group

Tanker Company of the Year
Olympic Shipping and Management

Shipping Financier of the Year
Eurobank 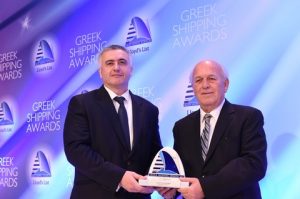 Mihail Georgiev, Vetting Superintendent of RightShip presenting the trophy to Captain Vangelis Kouzilos, president of the Liberty Organisation on behalf of “Hellas Liberty”

Achievement in Education or Training
University of the Aegean

Ship of the Year
“Hellas Liberty”